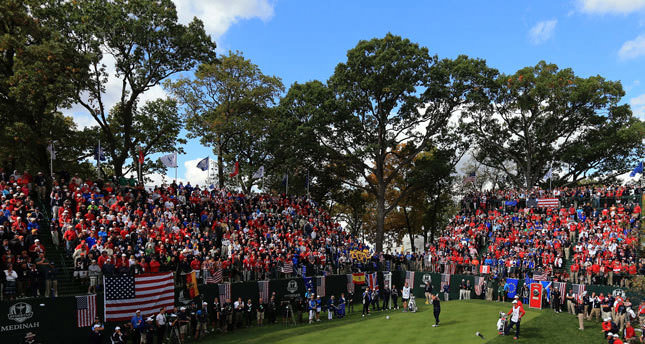 by reuters
Nov 18, 2014 12:00 am
There may be only 12 months left on their three-year contract with the European Tour but organisers of the Turkish Airlines Open say they are committed to running the November event until at least 2024. Ahmet Ağaoglu, president of the national golf federation, said he and his backers were delighted to be associated with the competition and that staging the penultimate tournament of the Final Series was instrumental in their bid to host the 2022 Ryder Cup. Turkey is one of six countries - along with Germany, Austria, Italy, Portugal and Spain - keen to stage the biennial team event in eight years' time. "With our two big sponsors Beko and Turkish Airlines we are increasing the popularity of this tournament year by year," Ağaoglu told Reuters in an interview at the Montgomerie Maxx Royal course in the south-western city of Antalya on the Mediterranean coast. "My idea is to stay with these two companies for the next 10 years. Our big target is to bring the Ryder Cup to Turkey in 2022. "Also in 2023 it is the 100th anniversary of the Turkish Republic so that is why we want to extend our European Tour Final Series programme until 2024." The six bidding Ryder Cup nations must prepare to host a series of meetings and inspection visits by officials between now and April 30, the date that formal bids need to be made. United States is to host the 2016 and 2020 editions, at Hazeltine and Whistling Straits respectively, while Paris will be the venue in 2018. The $7 million Turkish Open, won on Sunday by 24-year-old American Brooks Koepka, has only been going for two seasons but it is already recognised as one of the best organised tournaments on the circuit.