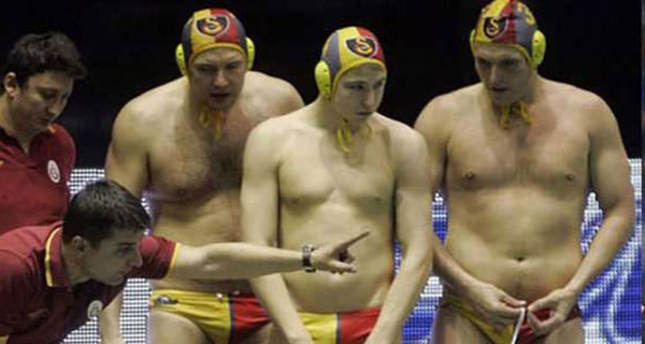 by daily sabah
Nov 27, 2014 12:00 am
Partizan Belgrade proposed yesterday to the European Swimming League to postpone over security reasons the waterpolo Champions League match with Turkey's Galatasaray after a fatal stabbing of a Serbian basketball fan in Istanbul. "Serbia's interior ministry informed us that it proposes, taking into account the current security situation, to postpone the match until conditions for its playing are met," the club, a multiple European champion, said in a statement. Meanwhile, Partizan Belgrade's basketball team came to Turkey for their upcoming game with Banvit in the Eurocup Group E. Partizan were welcomed with flowers by officials from the Turkish Youth and Sport Ministry and the Basketball Federation at Atatürk Airport. Special security measures were taken at the airport before the team's arrival. Celal Arısan, the General Secretary of the Basketball Federation, said, "We wanted to show Turkish hospitality to fix our relations with Serbia following the unfortunate incident. There are no problem between the two countries' federations and teams. Everything will be fine soon and we will play under the best conditions possible. I believe our fans will not show any reaction during the game." Partizan Belgrade's coach Dusko Vujosevic said that sports help break down barriers and bring people closer. "I hope we will not experience such a sorrowful incident once again. It was a great tragedy. We should pay attention to avoid such occurrences. I came here as a sportsman and a friend," he continued. Banvit asked Partizan Belgrade not to invite their supporters to the game for security purposes. According to certain social media sources, Red Star Belgrade fans will reportedly come to Istanbul with Olympiakos fans to take revenge over Ivkovic's death when they play Galatasaray on Dec. 18. On Tuesday, Turkish police arrested five Galatasaray fans in connection with the deadly violence. Serbian Prime Minister Aleksandar Vucic had earlier voiced "outrage over the monstrous murder" and his government demanded that the perpetrators be arrested and punished. Turkey's Prime Minister Ahmet Davutoglu called Vucic to express regret and condolences for the death. He pledged that Turkish authorities would do everything to find the killers.