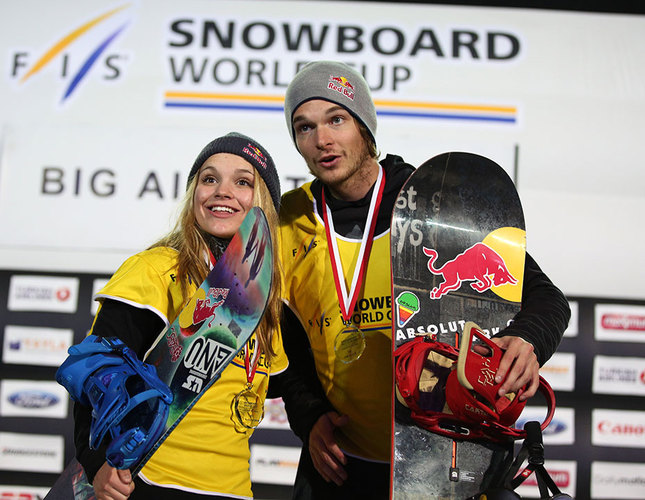 Ty Walker of the U.S., left, and Seppe Smits of Belgium pose for the media after they won the first prize for women's and men's during Big Air Snowboard World Cup on the campus of Istanbul Technical University in Istanbul on Saturday

American teenager Ty Walker claimed her maiden World Cup win as Turkey hosted a first-ever event of its kind with a spectacular snowboard big air event for both men and women.

Walker shone as Gölet Yolu square, right on the campus of Istanbul's University of Technology, was transformed; Belgian former world slope style champion Seppe Smits delighting the Europeans on show with victory in the men's.

The 17-year-old American, who finished 14th in the Olympic slopestyle competition in Sochi back in February, landed best runs of 85.50 and 71.00 for a winning overall total of 156.50. That was just better than Switzerland's Sina Candrian, who scored a best of 88.75 and 67.00 to finish just shy of promising American Walker with a score of 155.75 herself. Dutch snowboarder Cheryl Maas was third with 154.25 while Smits produced a series of stunning jumps to take victory in the men's with an overall total of 183.00. The two of Smits runs put forward scored 92.50 and 90.50, no one else passing the 90-point mark twice, with Jonas Boesiger second with 180.25 after an 88.75 and a 91.50. Brandon Davis ensured there was another American on the podium with 179.50 overall with Smits' tally of World Cup wins now standing at two following victory in Antwerp in November 2012.