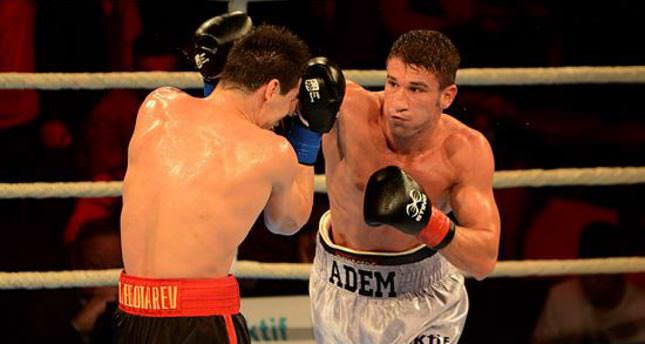 by Daily Sabah Jan 26, 2015 12:00 am
Turkish boxer Adem Kılıççı defeated Artem Chebotarev of Russia in the final match of a boxing tournament organized in Istanbul by the International Boxing Association (AIBA). Kılıççı overpowered his rival in the 75-kilogram category by points in the final game of the tournament held at Caferağa Sports Hall, qualifying for the 2016 Rio Olympic Games. Having also worn Turkey's national jersey in the 2008 Beijing and 2012 London Olympics, Kılıççı has become the first Turkish boxer to qualify to compete in three consecutive Olympic games.

Youth and Sports Minister Akif Çağatay Kılıç sent a congratulatory message to Kılıççı. In his message, the minister said: "Our national boxer won a big victory that made me very happy. I completely believe that he will get a medal in the Rio Olympic Games. I also believe our other sportsmen and sportswomen will achieve the same success and congratulate Adem Kılıççı." Kılıççı, 29-years-old, is currently a member of the Fenerbahçe Boxing Club in Istanbul. He won a silver medal at the 2004 World University Boxing Championship in Antalya. Kılıççı participated in the 2007 World Amateur Boxing Championships in Chicago and won the bronze medal as a welterweight.

In the Olympics in 2008, he was upset in his first bout by British boxer Billy Joe Saunders and moved up to the middleweight division. In 2009, Kılıççı gained the silver medal in the Mediterranean Games in Pescara, Italy, losing to Rachid Hamani. He won the silver medal at the 2011 European Amateur Championships held in Ankara, losing to Maxim Koptyakov (RUS). In the 2012 Olympics, he defeated Nursahat Pazziyev and Aleksandar Drenovak and then lost to Ryota Murata. He won a gold medal at the2013 Mediterranean Games held in Mersin.