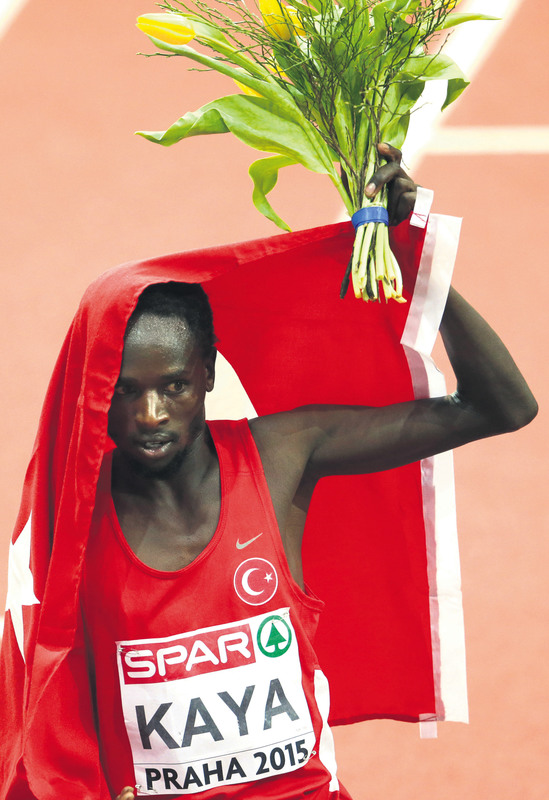 by Compiled from Wire Services Mar 09, 2015 12:00 am
Ali Kaya won the gold in the men's 3,000 meter race at the European Athletics Indoor Championships, which was held Saturday in Pragh, Czech Republic. Kaya crossed the finish line with a time of 7:38.42. British athlete Lee Emaunel came in second with 7:44.48, while Norwegian Henrik Ingebrigsten secured the bronze with 7:45.54. Youth and Sports Minister Akif Çağatay Kılıç congratulated Kaya on his win and wished him success in further championships, according to Anadolu Agency. Turkish national Karin Melis Mey came in seventh with a 6.57 meter jump in the women's long jump final after her suspension for doping expired. Serbian Ivana Spanovic came in first place with a 6.98 meter jump, while Sosthene Taroum Moguenara of Germany won the silver with a 6.83 meter jump and Florentina Marincu from Romania secured third place with a 6.79 meter jump.

Frenchman Renaud Lavillenie, the new master of the pole vault, added another title to his burgeoning collection as he retained his European Indoor Championship crown but failed to break his own world record, according to Reuters. The Olympic champion sealed victory with a championship record 6.04 meter vault on the second attempt, after he had quickly wrapped up victory with vaults of 5.75 meters and 5.90 meters. The U.K.'s Katarina Johnson-Thompson narrowly missed out on the pentathlon world record as she took the gold with 5,000 points. Her time of 2:12.78 over 800 meters in the fifth and final event was enough for a new British record - surpassing Jessica Ennis-Hill - but not quite enough to better Ukraine's Nataliya Dobrynska mark of 5,013 points set in 2012.
Last Update: Mar 09, 2015 1:12 am
RELATED TOPICS