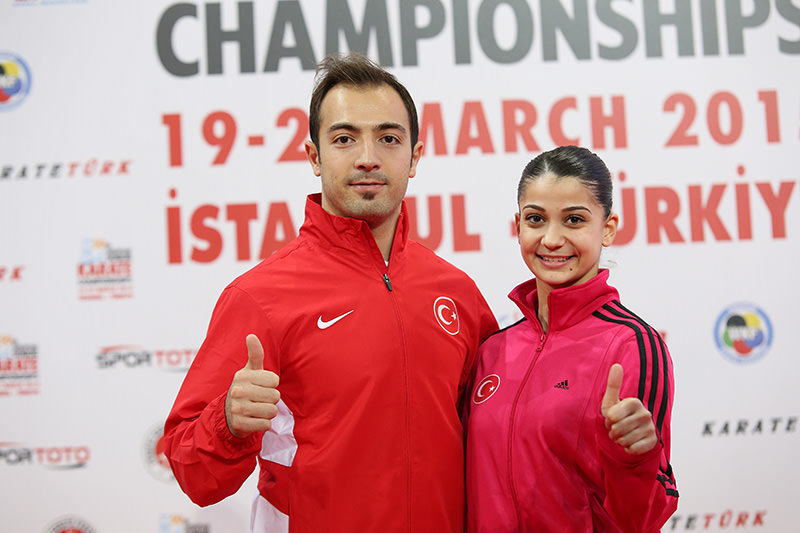 | Photo: AA
by Hakan Baş Mar 19, 2015 12:00 am
The 50th European Senior Karate Championships started in Istanbul yesterday with two Turkish karatekas advancing to the finals for the first time in the individual kata category.

Yakan, who won a bronze medal in the last two European championships, beat Romanian Razvan Adrian Guta in the first leg, Swiss Mirko Pascalis in the second leg and Danish Christoper Rohde in the quarter-final. Yakan faced the European title holder Italian Mattia Busato in the semis, beating his rival 4-1, and qualified for the finals.

Dilara Bozan, who came third in the last European championship, passed the first leg without a challenge. Bozan beat Swiss Melinda Mark in the second leg and Croatian Vlatka Kiuk in the quarter-final. She surpassed Veronika Miskova in the semis and qualified for the finals in the women's category.

Both Turkish karatekas will face Spanish rivals in the finals. Mehmet Yakan will fight with Damian Quintero on Saturday and Dilara Bozan with Sandra Sanchez at the Sinan Erdem Sports Facility in Istanbul.

Mehmet Yakan said, "I'm very happy. I have succeeded a first in Turkish karate history. My rival in the final is more experienced than me. I have lost to him three times before. I want to win the gold medal."

Dilara Bozan said, "We made a good start after a very hard training camp period. I'm very happy to advance to the finals. I will do my best to win in the final. The full tribunes will give us strength."
Last Update: Mar 19, 2015 5:50 pm
RELATED TOPICS