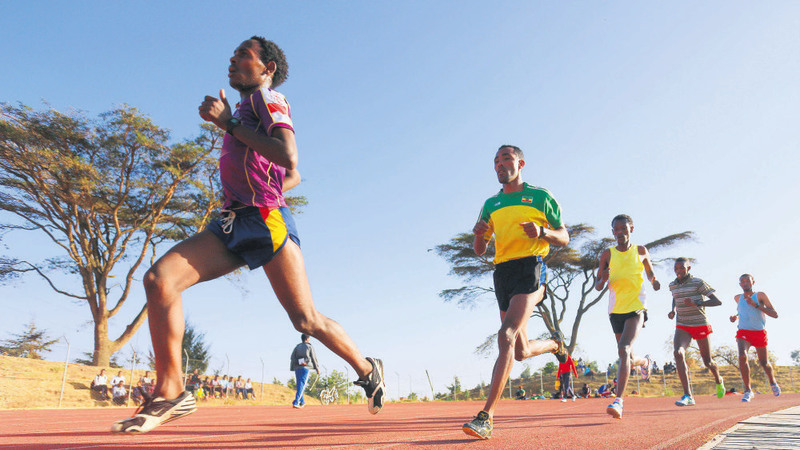 by Anadolu Agency
Mar 25, 2015 12:00 am
Clad in sportswear and studded running shoes, Ephrata Ansa warmed up for a two-hour, early-morning 100-meter sprint. At 17, Ansa hopes to eventually become an Olympic medalist. "I am inspired by all the big names who came from this city and became world-renowned athletic stars," Ansa said, citing well-known Ethiopian athletes Tirunesh Dibaba, Derartu Tulua and Kenenissa, all of whom came from Arsi. The young girl has come all the way from capital Addis Ababa to Arsi's Athlete Tirunesh Dibaba Sports Training Center - some 180km away - in the hopes of becoming an international star. She isn't alone. Scores of other Ethiopian athletes are doing the same, coming to the center in hopes of replicating the careers of earlier Ethiopian athletes who managed to achieve international fame. Established in 2009, the training center is the result of a dream to become a factory of champions, a fountain of athletic talent-and many Ethiopians are living this dream. Coach Tariku Temech, for one, was busy instructing his players. He gives players orders to warm up before running on the track. He is as young as the people he is instructing, but speaks articulately in the manner of a true leader. "The trainees have good discipline and ambition to improve their performance," Temech said. "They are very committed." Fully aware of the potential talents in the area, the government invested $11 million to establish the center. While it is only 74 percent complete, the center is currently receiving scores of athletes and potential champions. The training center is chalking up successes. The center's athletes have managed to win 30 medals in competitions across Ethiopia since the center was established. Center athletes receive $2.50 each every day for food and treatment. While this is peanuts compared to the money an athlete needs to invest in training, food and sportswear, money appears to be of little concern for those who come here.
Last Update: Mar 25, 2015 2:16 am