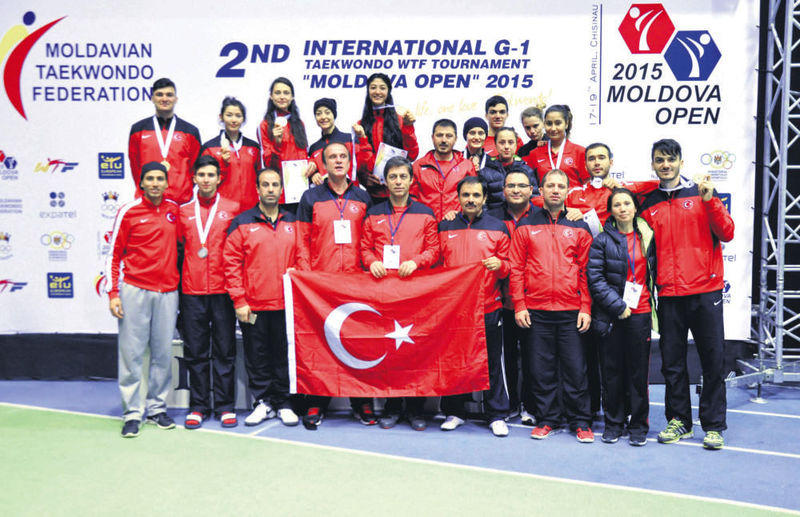 by daily sabah Apr 20, 2015 12:00 am
Turkey's national Taekwondo team won 14 medals and ranked first as a team in the 2015 Bosnia Open International Taekwondo Tournament, held in Chisinau, Moldova. The Turkish martial artists won four gold, six silver and four bronze medals in total. While Turkey participated in the tournament with 15 sports people, 449 martial artists from 36 countries competed in the tournament. İrem Yaman won gold in the women's 62-kilogram category and Nafia Kuş took the gold in the women's 73-kilogram category. Yunus Sarıaltın, in the 80-kilogram category and Ali Sarıaltın, in the 87-kilogram category, both won gold medals in the men's pool. In the female category, Hatice Kübra Yangın, Nur Tatar and Cansel Deniz won silver medals in the 53-kilogram, 67-kilogram and 73-kilogram categories. Berkay Akyol in the 68-kilogram, Servet Tazgül in the 74-kilogram and Serdar Yüksel in the 87-kilogram won silver medals in the men's pool. Rukiye Yıldırım in the 49-kilogram, Dürdane Altunel in the 57-kilogram, Furkan Asena Aydın and Sude Bulut in the 73-kilogram won bronze medals. Youth and Sports Minister Akif Çağatay Kılıç issued a congratulatory statement for the Turkish team. He said, "The Turkish taekwondo team made us proud and happy. The medals our team won is the proof of what we did on behalf of sport. I congratulate every one of them. I hope their successes will continue."
RELATED TOPICS