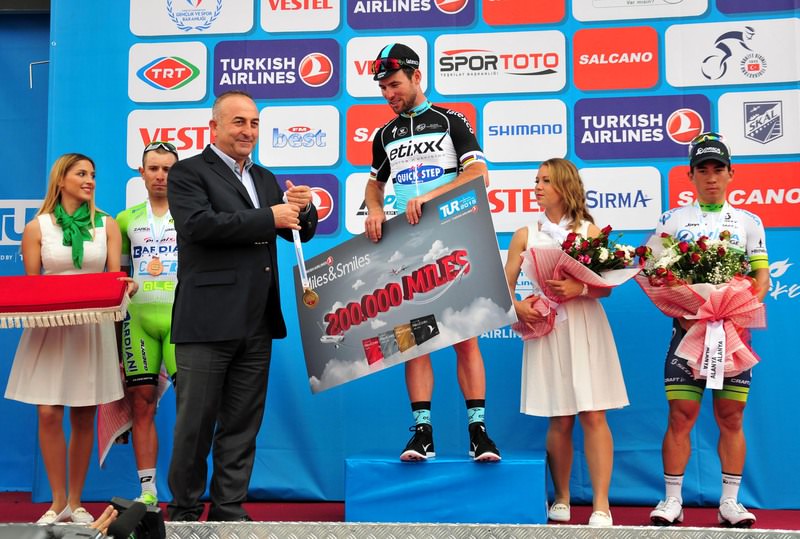 by Anadolu Agency Apr 26, 2015 12:00 am
World famous British sprinter Mark Cavendish, racing for the Etixx - Quick-Step team, won the first lap of the 51th Presidential Cycling Tour of Turkey in Antalya on Sunday.

He was followed by Australian Caleb Ewan who races for the Orica-GreenEDGE team, while Italian Nicola Ruffoni, who was racing for Bardiani - CSF, came in third.

"I like it here in Turkey, and I have a great team here to support me." Cavendish said in a press conference on Sunday.

"It's the first time I raced with Caleb Ewan. I think he is good, although, to me, he's just another competitor who I try and beat. I don't know if Orica Green-Edge have enough faith in him because they didn't put anyone at the front, and it was a shame for him because he was close today. However, there have been many, many people in my career who have beaten me once, then got a good contract." he said.

Cavendish had won four laps during the 50th Presidential Cycling Tour of Turkey in 2014.

Cavendish has also won 25 Tour de France stages, placing him third on the all-time winners list of the world's most famous cycling race. He also plans to represent the Isle of Man in this year's Commonwealth Games in Scotland.

The second lap of the 51th Presidential Cycling Tour of Turkey will take place on Monday on a 182 km-long route between the provinces of Alanya and Antalya.

First organized in 1965 as the Marmara Cycling Tour, the Turkish tour has emerged as a showcase for Turkey's natural beauty and has been broadcast live by local and international TV channels since 2009.