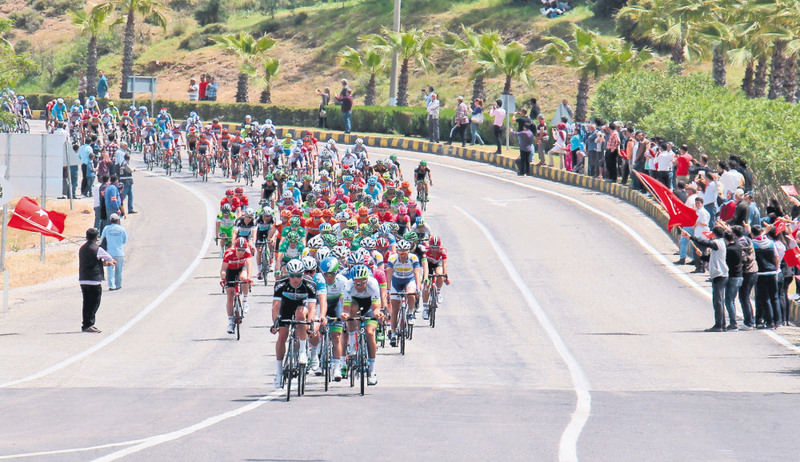 by daily sabah Apr 28, 2015 12:00 am
As expected, double stage winner Mark Cavendish (Etixx-QuickStep) relinquished his overall lead in the 2015 Presidential Cycling Tour of Turkey yesterday as Davide Rebellin (CCC Sprandi Polkowice) won the key mountain stage. The 43-year-old Italian Rebellin out-sprinted fellow escapee Kristijan Durasek (Lampre-Merida) on the steep final climb to Elmali to take his first victory of the season, and move into the overall race lead. Prior to the 10-kilometer long final ascent, the three remnants of the day's escape group were mopped up by the peloton: Pavel Brutt (Tinkoff-Saxo), Youcef Reguigui (MTN-Qhubeka) and Jelle Wallays (Topsport Vlaanderen-Baloise). With sections at over 13 percent incline, many riders were put into difficulty early on in the final climb and the peloton was soon split into pieces. Cavendish was one of those to get dropped early on, no doubt saving his legs for sprint stages later in the race.

Kristijan Durasek (Lampre-Merida), Davide Rebellin (CCC Sprandi Polkowice) and Heiner Parra (Caja Rural) were the first to strike out. Parra was soon dropped and joined chasers Jay McCarthy (Tinkoff-Saxo) and Enrico Barbin (Bardiani CSF). With 5 km to go, Rebellin and Durasek had built up a 25-second lead over what was left of the main group and by 3 km to go it was nearly a minute. As the chase faded and the gradient steepened in the final 2km, Eduardo Sepulveda (Bretagne-Seche Environnement) caught and passed McCarthy, Barbin and Parra to pursue Rebellin and Durasek on his own. However, the Argentine rider couldn't bridge the gap and it was a two-way sprint between Rebellin and Durasek for the win, with Sepulveda settling for third. Rebellin leads Durasek by seven seconds overall going into Wednesday's lumpy fourth stage from Fethiye to Marmaris over 132 km. The 2015 Tour of Turkey concludes on Sunday.

Results of the stage three: Kemer to Elmalı, 165km