Teams round the last bend in Turkey's Presidential Cycling Tour 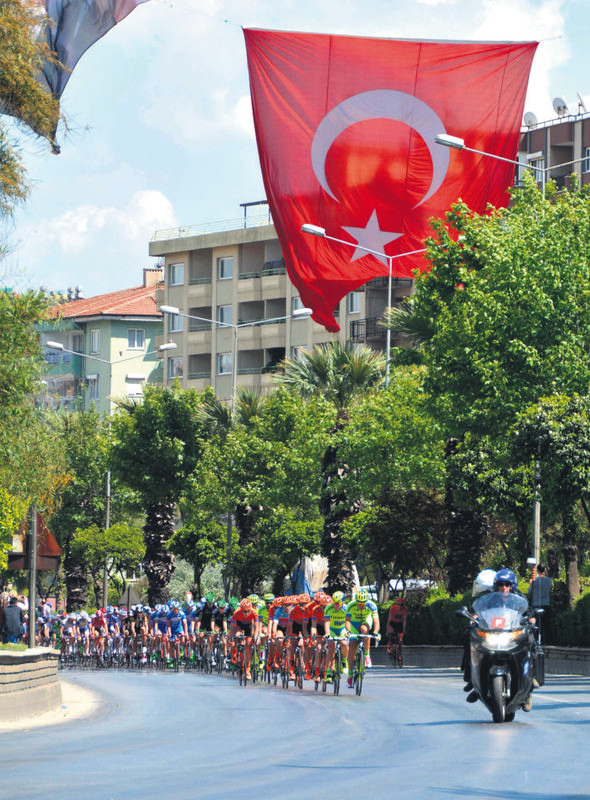 While the Tour of Turkey, an eight-stage international cycling race ends on Sunday, it hosted some of the world's elite competitors and contributed to Turkey's promotion having emerged as an opportunity to showcase the Turkish landscape

The cycling world has eyed the world's only intercontinental cycling race, the 51st Presidential Cycling Tour of Turkey. Twenty-one teams, 168 cyclists have competed in eight stages of the competition, which began on April 4, in Turkey's Mediterranean resort town of Alanya and lasts until Sunday. On Friday, Kristijan Durasek (Lampre-Merida) snatched the overall race lead from Davide Rebellin (CCC Sprandi) after distancing the Italian on the steep climb to the finish in Selçuk.

Pello Bilbao (Caja Rural) won the stage after going clear in the final two kilometers. He caught and then dropped Miguel Angel Lopez (Astana) before the line and won by three seconds. His teammate Heiner Parra was third at 11 seconds.

Durasek finished sixth in the stage, while Rebellin cracked in the final kilometer and finished out of the top 10. Durasek now leads overall by 21 seconds. Eduardo Sepulveda (Bretagne Seche) is third overall at 32 seconds. With only two stages remaining as of press time, Durasek is now the favourite for the overall victory.

The tour hosts some of world's elite competitors like British cyclist Mark Cavendish, who has won the first two stages of the tour this year. This is the second time he takes part in the Tour of Turkey.

Last year, Cavendish, racing for the Etixx-Quick-Step team, won four stages of the tour and was awarded the best sprinter award.

Cavendish has won 25 Tour de France stages, placing him third on the all-time winners list of the world's most famous cycling race.

Belgian Tom Boonen, another member of the Etixx-Quick-Step team, is considered to be one of Cavendish's main opponents in this year's tour.

Among other known competitors participating in the Tour of Turkey are German cyclists Marcel Kittel and Andre Greipel.

Turkey's Torku Şekerspor, which came in fourth place last year, is the only continental team competing in the race.

The Tour of Turkey consisted of flat stages and two climbing ones, of which the Gogubeli pass, 1,850 meters above sea level, is considered to be one of the most difficult of the tour. In addition, the Selçuk pass, in the tour's sixth stage, will have cyclists pedaling up to 400 meters high in the last five kilometers to reach the House of the Virgin Mary.

UNESCO World Heritage site Pamukkale, located in the southwestern Denizli province, was once again included in the tour after a four-year absence. It is featured in the tour's fifth stage held last Thursday.

This year's seventh stage runs through Turkey's western province of Manisa for the first time. The finish line is in Izmir; cyclists then travelled to Istanbul on for the eighth and final stage - a course that connects Europe to Asia via the Bosphorus Bridge, making it the only international cycling race linking two continents.

First organized in 1963 under the name Marmara Cycling Tour, the tour gained international recognition in 1965. Since 1966, the tour takes place under the Turkish president's patronage. The tour has emerged as an opportunity to showcase Turkish landscape. It has been live-broadcasted by domestic and foreign TV channels in 190 countries since 2009. Last year's event was broadcast for a total of 183 hours to 588.4 million households.
Last Update: May 01, 2015 10:26 pm
RELATED TOPICS