Fight of the century becomes murky 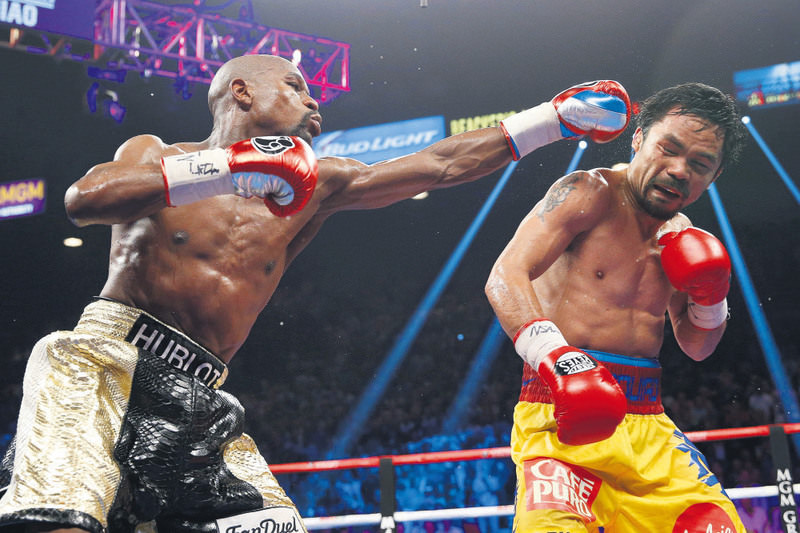 The people who paid $99.95 to watch at home had no clue. Neither did those spending $40,000 or more for a ringside seat Saturday night in Las Vegas. And, surely, the bettor who wagered $500,000 at the MGM Grand sports book on Manny Pacquiao to beat Floyd Mayweather Jr. wasn't in the loop. They all thought they were getting the Fight of the Century. Two fighters who, if not in their prime, were at least in peak condition for the fight of their lives.

What they got instead was a one-armed Pacquiao chasing Mayweather around the ring for 12 rounds. The Filipino who normally is a punching machine landed only 18 right jabs and didn't even throw as many punches as the defensive-minded Mayweather.

His shoulder had been injured in training. Injured so badly that Pacquiao will undergo surgery this week for a rotator cuff tear. Yet the fight went on. No one outside the Pacquiao camp knew until two hours before the fight, when his handlers unsuccessfully sought permission from Nevada boxing officials for a shot of Toradol, an anti-inflammatory used to treat acute pain.

Fighters are tough guys. They often enter the ring not 100 percent because in boxing it's an unwritten rule that the fight must go on.
But this was different. This was the richest fight ever, a boxing match so big that the fighters were getting paydays that rivaled the gross domestic product of some developing countries. This was a fight so hugely anticipated that it demanded the best of both fighters.

"I wanted to be more aggressive but it was hard for me to fight (with one hand)," Pacquiao said. It's hard to blame Pacquiao, even if he lied a day before the fight when he checked the "no" box on a commission form asking him if he had a shoulder injury. He had the weight of an entire country on his shoulders, and he badly wanted to fight. The people around him, though, are another matter. They knew their fighter was damaged goods, but sent him into the ring anyway. The stakes were too high. The money was too big. The richest fight ever had to go on.

"Athletes always fight hurt," promoter Bob Arum said the night of the fight. "We felt the work that was done on the shoulder during training would give him the opportunity to use the right hand. He deals with the injury and thinks he conquered it and it was reinjured again. Happens in football and every sport."

Turns out there was a reason trainer Freddie Roach closed sparring sessions a month before the fight. Nothing to see but a one-armed fighter getting ready to fight the best fighter of his generation. The problem for Pacquiao's camp wasn't in keeping Mayweather in the dark about the injury. That's fair game in boxing, where there's little advantage in letting an opponent know about any weakness.

But no one told Nevada boxing officials, not even when specifically asked on the form filled out by Pacquiao just before the weigh-in. They were blindsided when, just before the fight, Pacquiao's handlers asked if it was OK for their fighter to get a shot to deaden the pain in his shoulder. By then it was too late. Allowing the shot without knowing exactly what the injury was would have put Mayweather at a disadvantage, at the very least. "They had plenty of time to disclose it," said Bob Bennett, executive director of the Nevada Athletic Commission.

The lack of disclosure will probably mean a fine, and possibly a suspension for Pacquiao. He can afford both, with a payday that figures to exceed $100 million and a lengthy recovery time from shoulder surgery.

Still, Nevada boxing regulators need to do something. They thought they had done everything possible to ensure a fair fight, but ended up being snookered instead. It won't get people back the money they paid, something a pair of fans are seeking in a federal court lawsuit filed Tuesday against Pacquiao and his handlers. But it might give them some confidence that the next time they are asked to dig deep into their wallets they can do so with confidence that they are getting what they paid for.

Meanwhile, Floyd Mayweather added another wrinkle to the fallout of his fight against Pacquiao by saying he would be open to a rematch after the Filipino southpaw recovers from shoulder surgery, according to an ESPN report on Tuesday.
Last Update: May 06, 2015 10:55 pm
RELATED TOPICS