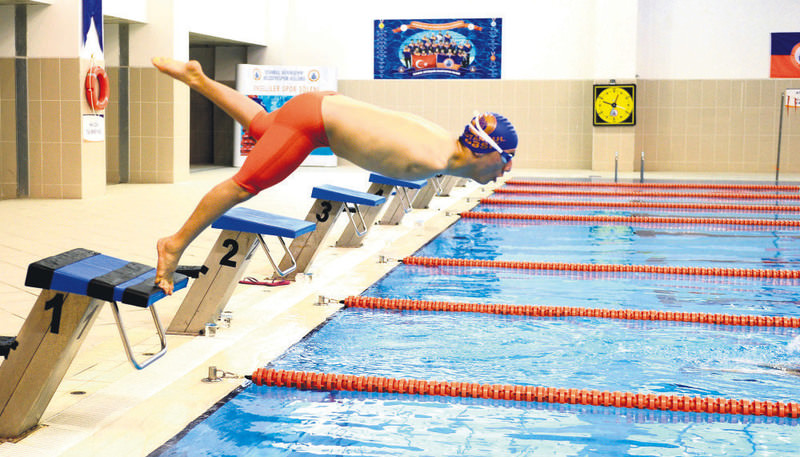 Beytullah Eroğlu started to compete in the physically disabled national swimming team in 2011. "As a first in the country's national disabled swimming history, I advanced to the final and came sixth. In 2012, I entered in the London Paralympics and came seventh. It was also a first. One year later, I came fourth at the IPC Swimming World Championships," he said. The young swimmer said that he wants to take the Turkish flag to the top spot at the upcoming world championship as "the Turkish flag deserves this honor." Enjoying second place at the 2014 IPC Swimming European Championships, Eroğlu has no arms and one of his legs is shorter than the other.Eroğlu said his biggest aim is to win the gold medal at the 2016 Rio Paralympic Games. The ambitious swimmer started swimming at an early age. "I did not play in the street when I was a child as I did not want to make my clothes dirty. I used to think that someone would mock me. When I started doing sports, my thoughts were changed and my self-confidence improved," he said. 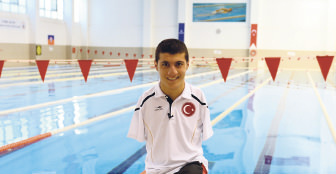 He went on to say that one of his most important accomplishments came when he was included in the Istanbul Metropolitan Municipality's (İBB) team. "Before I entered in the İBB team, I was doing sports as an amateur. My team supported me both financially and emotionally. I became more professional. Success comes with professionalism, which directly relates with concentration," he said. Eroğlu said he gradually became professional. "When I do it properly, I will be the world champion and I want to achieve it this year," he continued.

Eroğlu believes that swimming has changed his perception toward life. "I used to be a child who did not talk much, even at home. I did not want to go to school and when it started, my friends wanted me to become class president," he said. "Later, I turned out a very energetic child and people began to ask me to talk less," Eroğlu went on to say. "I gained self-confidence through sports. People with disabilities do not have to be successful, but should do sports. It helps them to develop their personal character," he continued.

While he is preparing for the world championship, Eroğlu also continues his studies at the Istanbul University's Sports School. "I am living a fast-pace life. My life shuttles between training and school. It is a tiring process, but I want to win a medal at the world championship in return for my efforts. I also want to share my experiences in my academic life," he added. Talking about his difficulties, Eroğlu said he wakes up at 6 o'clock in the morning every day for training. 'Then I go to the school and afterwards I have another training session. My father is my coach. He left his job and now totally focuses on me. I hope I will not disappoint him," he said.

He further said his success increased the interest of disabled people toward sports. Recalling his European championship in 2011, he said there were 26 Turkish swimmers in the Turkey leg prior to the international competition. "When I became champion, the number of the sportsmen increased to 200. If I get a medal, I believe more disabled sportsmen will compete in upcoming competitions. I compete for both myself and disabled people from Turkey and around the world. There are Turkish sportsmen who do not know well about these championships. If I have enough potential to win, they can also do the same," he said.

Wrestler Şeref Eroğlu, who participated in the European and world championships and is the uncle of the young swimmer, gives great support to him. Eroğlu said when he started professional sports; his uncle was always beside him. "He greatly contributed to my professional development. I always felt happy when he became champion. We celebrated them. I followed his footsteps and benefited from his experience," he said. The young athlete swims around 6 and 7 kilometers every day and said the pool is where he feels most relaxed. He said he feels free when he swims. "Only one-10th of human weight is felt in water. Being in water means happiness. I am now more professional. When I swim, I think of hearing our national anthem during the award ceremony. Our flag and national anthem are the best. I always work with the same dream," he said. Eroğlu said that his disabled friends find water the most relaxing place. "When I go outside, some people look at disabled people with a different look. I want to change this perception. I do not care what they think, but it makes me feel a little bit unhappy. It is not appropriate to differentiate as disabled or not," he said. Eroğlu said his international friends attend their training without difficulties. "I participated in camps in Spain and other countries. Sportsmen in wheelchairs suffer more difficulties than those abroad. It is more difficult for us to achieve success, but we do not like defeat," he concluded.
Last Update: Jun 09, 2015 1:03 am
RELATED TOPICS