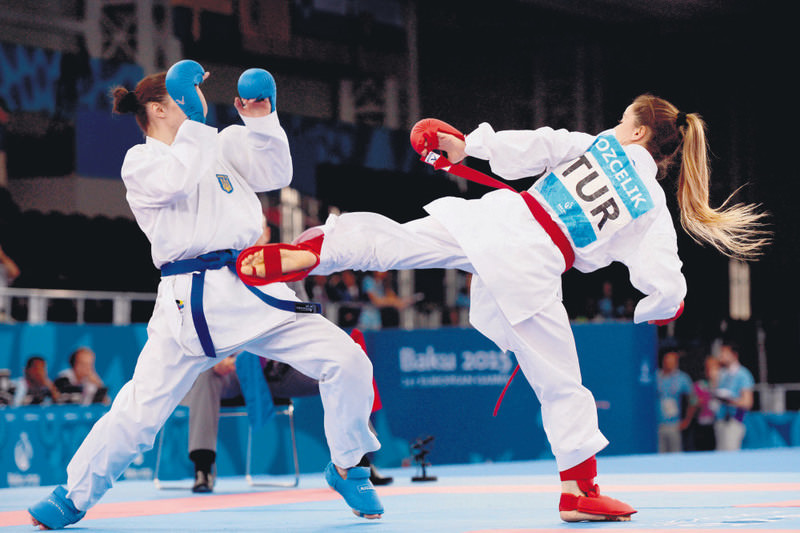 Özçelik entered the final in strong standing, with Turkey having won more medals than any of its rivals at the women's kumite in Istanbul, collecting 11 medals to nine each by France and Spain.

Bursting into tears, 27-year old Özçelik said, "I'm very happy for winning the gold medal. This is my first European Games and winning a medal here is very important for me. I wish karate was included in the Olympics.

Burak Uygur won Turkey's second gold medal at the men's kumite 67 kilogram class, defeating his French rival Steven Da Costa. Uygur initially took the lead 3-0 but an ippon by Da Costa in the last two seconds of the match brought the score up to 3-3, however the judges ruled in Uygur's favor and he was awarded the gold.

Uygur said, "This is the happiest moment of my life. I have never felt better. We worked a lot for the medal. It was my father who encouraged me to do karate. He was also my trainer. I thank him."

Meanwhile, Turkish wrestler Cenk İldem dedicated his wrestling bronze medal to his six-month-old son and pledged to make it gold at the world championships.

Ildem beat Azerbaijan's Orkhan Nuriyev in the 98kg Greco-Roman bronze medal match at the Heydar Aliyev Arena on Saturday (June 13) to take his tally of bronzes in major competitions to four.

Although happy with another medal, he said he would try to capture gold for his little boy at September's world championships in Las Vegas.

"This bronze medal is for my little baby, who is six months old," said the 29-year-old. "I was competing for him and now I will do my best to convert this bronze into gold at the world championships.

"This is my fourth third-place medal and I cannot do with bronze any more.

"I am happy that I am not going home empty-handed, but my heart would have liked gold so that our anthem could be heard and the flag flown."

Russia and Azerbaijan, won all four gold medals on offer on the first day of competition at the Heydar Aliyev Arena. Azerbaijan lost all three of their face-offs against Russian opponents, one in the quarter-finals, one in the semis and one in a final, as Russia took three golds.

In volleyball, Azerbaijan got their European Games campaign off to a winning start when they recorded a 3-1 win against Romania. Turkey's women national team was beaten by Poland 3-1. Serbia powered to a 3-0 win over Croatia in the first women's volleyball match of the European Games.

Turkey's men national vollyball team powered to a 3-1 win over Serbia in their first volleyball match in the European Games.

Azerbaijan's seven medals on day one of the European Games was the highest return for any nation and their early triumph is vital for delivering a successful event, Baku 2015 chief operating officer Simon Clegg said on Sunday. On the shores of the Caspian Sea, and with a vociferous home crowd roaring them on, the Azeris won three gold medals, one silver and three bronze in an impressive start to the competition. The hosts trail only Switzerland, who have also won three golds but more silver medals.

To be staged once every four years, the Baku leg of the European games brings together over 6000 athletes from 50 European countries to compete in 20 sports. Turkey is competing with 109 male and 81 female athletes in 23 disciplines belonging to 19 different athletics fields.
Last Update: Jun 14, 2015 10:29 pm
RELATED TOPICS