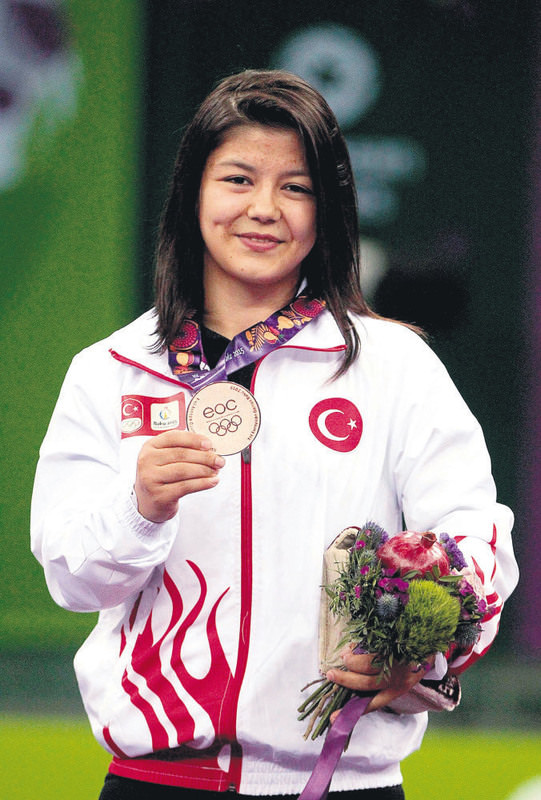 by Daily Sabah Jun 17, 2015 12:00 am
Turkey won its first medal in women's wrestling when Merve Kenger clinched the bronze medal in the 53kg Freestyle bronze final against Natalia Budu of Romania during day four of the Baku 2015 European Games at Heydar Aliyev Arena on Tuesday in Baku, Azerbaijan. Turkey's taekwondo star Servet Tazegul was left disappointed after being eliminated by Polish rival Karol Lobak 21-9 in the very first tour. The 26-year-old previously won an Olympic gold in London in 2012, an Olympic bronze in Beijing in 2008 and has also claimed three world titles in the 68kg category. He was deemed one of the favorites going into the tournament held in Baku. Meanwhile, Oğuzhan Tütün, who competed in the Men's Trap Qualification Day 1, was also eliminated, ranking only 15th. Also, Russian synchronized swimmer Anisiya Neborako picked up three gold medals at Baku 2015. Neborako, the undoubted star of the synchronized swimming program, landed her second and third gold medals at the Baku 2015 European Games on Tuesday and then joked that she hoped any reward from the Russian Federation would help her buy a car. The 18-year-old collected solo and free combination medals to go with the teams free routine, displaying a rare artistry.
Last Update: Jun 17, 2015 10:41 pm
RELATED TOPICS