Akgül flies the flags in Baku 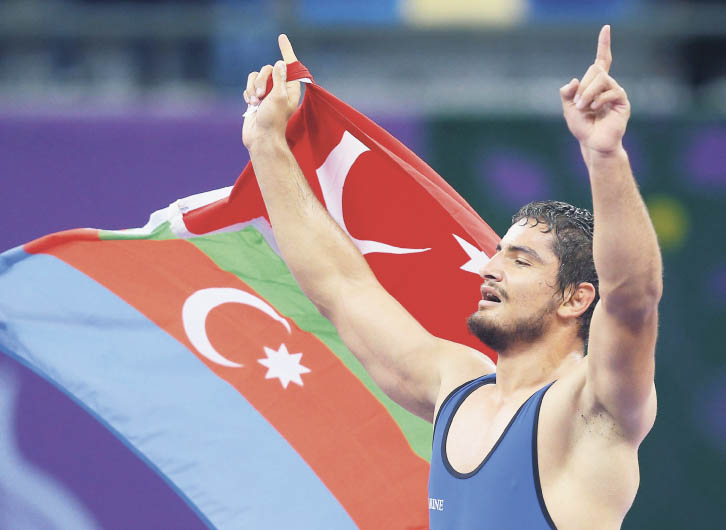 Renowned Turkish wrestler Taha Akgül won gold at the European Games in Baku, bagging the second gold medal in wrestling for Turkey at the games. Elsewhere, Turkey cruised past Romania into the volleyball quarters

Turkey's Taha Akgül rounded off six days of wrestling by winning gold in the freestyle heavyweights on Thursday night. He then ran around the ring with the flags of his homeland and Azerbaijan, much to the delight of the crowd at the Heydar Aliyev Arena. Akgül's easy win in the 125 kilogram against Belarus's Aleksei Shemarov took Turkey to third place at the wrestling medal table behind Azerbaijan, which added three bronzes on the night, and the clear winners, Russia.

On Friday, Turkey earned a place in the quarter-finals of the first European Games' women's volleyball tournament as they swept aside Romania 3-0. It was a routine victory (25-16, 25-22, 25-19) for the world No. 8 team, who were again loudly cheered on in Crystal Hall 1. The win was Turkey's third in a row, and Polen Uslupehlivan was in confident mood after the Pool A game. "I think we are stronger than the other teams," she said after scoring 25 points. "Azerbaijan is our strongest rival. We are level with them." Turkey will play Azerbaijan in their final Pool A game on Sunday, while Romania will face Italy. In Pool B on the same day, Croatia will play Germany, while Bulgaria will face the Netherlands.

On Friday Melek Hu of Turkey was defeated by Jiao Li of the Netherlands 4-2 in the Women's table tennis semi-finals.

Elsewhere, Russia's Alexey Alipov hit 34 targets in succession as he recovered from a poor start to win gold in the men's trap. World champion Erik Varga of Slovakia was the only competitor to hit all 15 targets in the six-man semi-final, and missed only one shot in the final, but could only grab silver as Alipov recorded a perfect 15.

Switzerland emerged at the top of a chaotic Pool B in the men's beach volleyball competition as Spain were eliminated in extraordinary fashion.

"Gold in the all-around is the most prestigious medal. It makes you a real Baku 2015 champion," said Van Schoor after the Belgians won by more than a point in the final at the National Gymnastics Arena. Van Gelder said: "It means you're good at everything, all three routines."

After performing their first two exercises on Wednesday, the Belgians had a 0.912 lead over Russia before they performed their final routine on Friday.