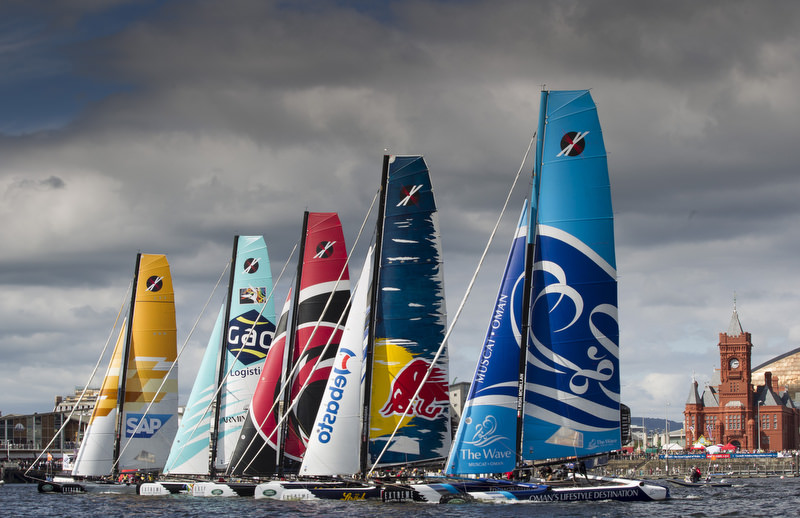 by Anadolu Agency Jun 20, 2015 12:00 am
Team Turx is the first ever Turkish team taking part in the Extreme Sailing Series (ESS), which pits the world's best sailors against each other in a series of races.

Referred to it as the Formula 1 of the seas, the ESS is a high performance, adrenaline-fueled sport of sailing.

Currently being held in the U.K. for its fourth act, the team representing Turkey finds itself seventh, out of eight teams competing, with two more days of races to go.

Turkish sailor Edhem Dirvana - co-skipper and founder of the team - said: "It's a great feeling to be able race with the best sailors of the world in the United Kingdom, the birthplace of sailing. The most important thing is to be one of the best in the world, make our names heard and make the Turkish flag fly."

After the first day of races in Cardiff, the 38-year-old captain said he first gathered the group that was to become Team Turx about three years ago in Bozburun Peninsula, in the southwestern coast of Turkey.

"We left a good impression following last year's participation in the Istanbul races as a local guest team. The organization has seen that a good team could come out of Turkey," said Dirvana, also national Dinghy champion.

Already planning to join the ESS 2016, the Turkish co-skipper added: "We only cracked the door open and got our foot in. We have the potential to be one of the main players of this game."

In the previous act held in China, the Turkish team finished fifth.

"This sport takes sailing to another dimension," says Dirvana.

All competitors sail what are called Extreme 40-type boats. Depending on the water and weather conditions, the boats can rise up above the water about 3 meters and reach speeds of about 60 km/ph. The 40-foot Extreme 40 catamarans are light and very powerful.

"Having the ability of fast thinking and foresight is very important in extreme sailing," says Dirvana. "Besides all this speed, there is a price for it: the risk of being unbalanced and easily lose control. The boat can turn over, accidents do happen. However on the other hand, it is full of joy, adrenaline-fueled. The rankings can change swiftly. You can start as the leader team and finish last."

Turkish European sailing champion Selim Kakis stressed that the Cardiff act was the toughest course that he had experienced so far.

"Comparing Cardiff to the previous race courses, this place has the most narrow and limited area. The boats get too close to each other. The wind was above the average too so the boats started to speed up," he explained. "In the blink of an eye, one part of the course is over. It's a pretty tough and tiring race."

The U.K. act will be over following the final races on Sunday.

In the ESS races, teams from across the world start with a four-minute countdown. Depending on the number of boats and wind conditions, the courses may change shape. An act consistsThe winner of each race gets 10 points, second place receives nine, and so on.

This year's series is being held in three different continents with racecourses in eight different countries. Teams will race in Germany on July 23-26 after Cardiff, in Russia in Aug. 20-23, in Turkey in October 1-4. The ESS 2015 will end in Australia in December 10-13.