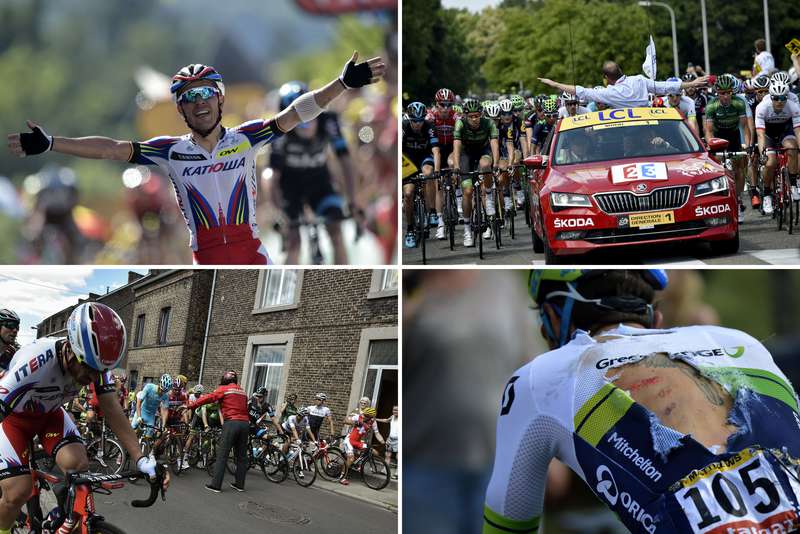 | AFP Photo
by Daily Sabah Jul 06, 2015 12:00 am
The third stage of the 102th Tour de France witnessed a terrible cycling accident on Monday, injuring about 30 riders.

The accident happened about 60 kilometers away from the finish line at the foot of Côte de Bohissau. The pile-up occurred after William Bonnet of team FDJ lost his balance and fell. The crash resulted with the injury of about 30 riders including yellow jersey bearer Fabian Cancellara. Though Cancellera continued the race, five riders –Tom Dumoulin, Simon Gerrans, William Bonnet, Laurens ten Dam and Dmitry Kozontchuk– had to abandon the races because of their injuries.

The races were brought to a halt on race director Christian Prudhomme's order but after necessary medical intervention, the stage was resumed about 25 minutes later. 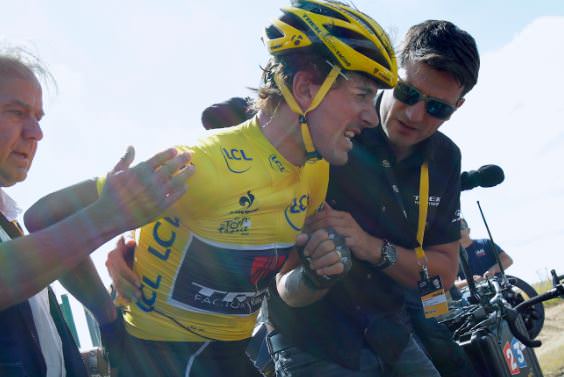 Spaniard Joaquim Rodriguez of team Katusha finished the 159.5 km stage from Antwerp in 1st place in 3 hours 26 minutes and 54 seconds, passing 2nd-place Chris Froome. But with a total time of 7 hours 11 minutes and 37 seconds, British Froome of team Sky took the title of yellow jersey bearer a.k.a. the general classification winner from Fabian Cancellara who lost his pace after crashing heavily during the accident.

The 223.5 km 4th stage of the Tour, the toughest stage yet, will take place on Tuesday. It will kick off in Belgium at Seraing and finish in home-soil in Cambrai of France.

The 102th races are made up of 21 stages and will finish on 26th July in French capital, Paris.