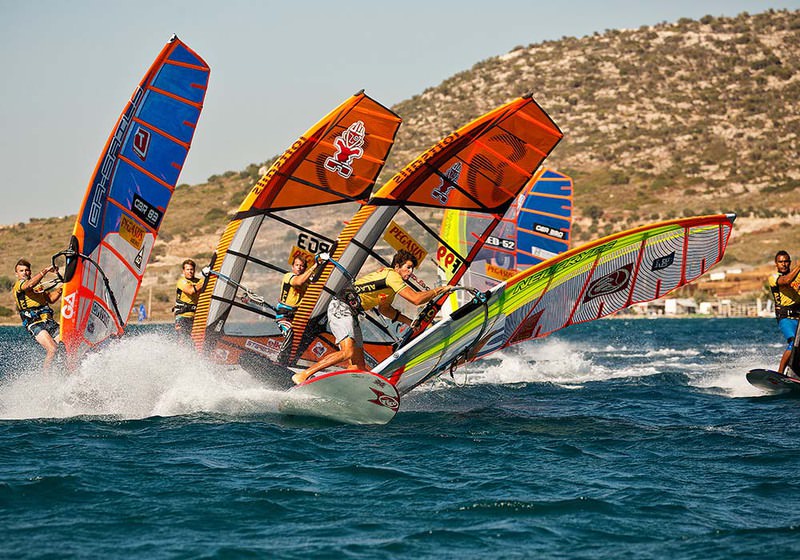 The Turkish leg of the Professional Windsurfers' Association World Cup will be attended by some of the world's best windsurfers between today and Aug. 22. It will enhance the popularity of the sport in Turkey, which has some of the best windsurfing spots in the world

Turkey's coastal Aegean town of Alaçatı is set to host something that has a growing reputation in the country - windsurfing.

The Turkish leg of the Professional Windsurfers' Association (PWA) World Cup, which began in Korea on May 1, will be attended by some of the world's best windsurfers between Aug. 17 and Aug. 22.

The event will not only give audiences a chance to watch world-famous surfers, it will also enhance the popularity of the sport in Turkey, which has some of the best windsurfing spots in the world.

"As it is surrounded on three sides by the sea, Turkey has been associated with windsurfing since the 1970s," said Uluğ Kürşad Ekmekçi, head instructor at Alaçatı Windsurf School.

Çağla Kubat, Turkey's most prominent professional female windsurfer and instructor, told Anadolu Agency (AA) that interest in the sport has been increasing in the country with every passing year.

"I have received more and more students. I only had students from Ankara or Istanbul before, but now I have students from the provinces like Bursa, Samsun or Antalya," said Kubat, who has run the Çagla Kubat Windsurf Academy for four years. "We have nearly 700 students during the season; sometimes this number reaches 1,000 in other academies," she said.

Kubat has also won the Turkish National Women's Slalom Cup for eight times. The athlete, defining the sport as her passion, said that she will also compete in the women's races: "I practice every day. The Turkey leg is important."

"The PWA is one of the most important and challenging races in windsurfing. I am targeting the final three ranks in the slalom races," Kubat said.

"Alaçati is a perfect place for windsurfing. The wind is thin in the morning but increases towards the evening," she said. Kubat points out that Alaçatı has contributed a lot to Turkey's rising role in windsurfing. "The town provides all the necessary opportunities for windsurfing more than anywhere in the world. Everyone, at every level, can windsurf in Alaçatı," Kubat said. The town, only half an hour away from İzmir and 10 minutes from the idyllic Çeşme resort, is one of the world's best windsurfing destinations. Hosting thousands of professional and amateur windsurfers from Europe, the United States and even from Australia from April through October, Alaçatı has turned into a windsurf center for a variety of local or internationally recognized windsurfing races.

According to Ekmekçi, Alaçatı offers certain advantages that Greece, France or Spain do not: "Wind, turquoise water ... All are perfect while the prices are more reasonable compared to many places in Europe."

"However, we need to publicize windsurfing more in Turkey. Turkish people think that it is an expensive and seasonal sport but it is not," Ekmekçi said.

Reminding that Turkish media used to broadcast the PWA races live a couple of years ago, Ekmekçi said: "In recent years, there has not been as much media attention on the sport as much as on football or basketball."

"We should show people that windsurfing is not such a hard sport. [...] The more people who know about windsurfing means the more champions that Turkey will have," Ekmekçi said.
RELATED TOPICS