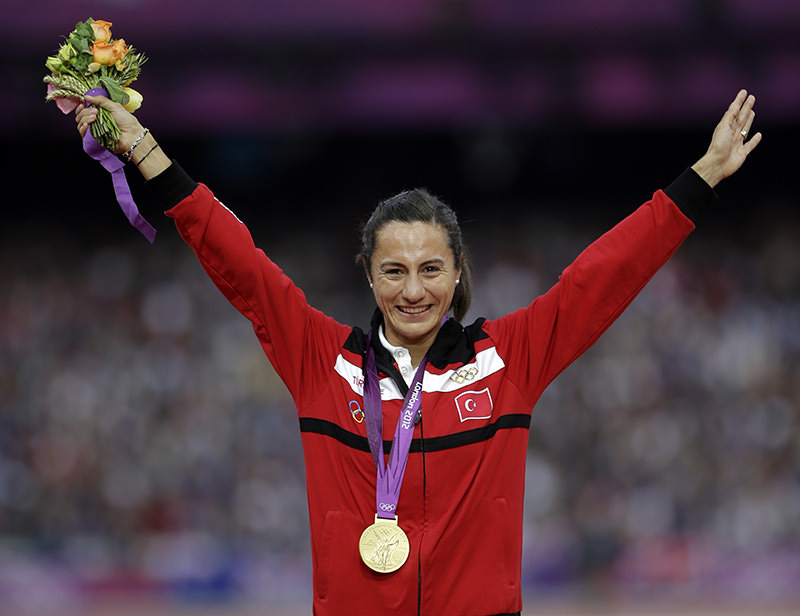 In this Aug. 11, 2012 file photo Turkey's Asli u00e7akir Alptekin poses with her gold medal for the women's 1500-meter during the athletics in the Olympic Stadium at the 2012 Summer Olympics, London (AA Photo).
by Daily Sabah with Wires Aug 17, 2015 12:00 am
Court of Arbitration for Sport suspended on Monday Turkish female distance runner Aslı Çakır Alptekin from international competitions for eight years over doping. The Turkish Olympic champion has accordingly agreed to give up her 1,500-meter title and serve an 8-year ban for blood doping, reported agencies.

The Court of Arbitration for Sport (CAS) says it approved a settlement agreed to by Alptekin and the IAAF. CAS says Alptekin has forfeited all her results from July 29, 2010, including the 2012 Olympic gold and her 2012 European Championship title. CAS says the IAAF charge that Alptekin manipulated her blood between July 29, 2010, and Oct. 17, 2012, "is upheld by default."

Alptekin was investigated based on abnormal blood values in her biological passport. The IAAF appealed after the Turkish Athletics Federation cleared Alptekin in December 2013. Alptekin previously served a two-year ban for a positive test at the 2004 world junior championships. Biological passports work by creating individual blood profiles for each athlete, rather than testing for specific performance-enhancing drugs. If a blood reading deviates markedly from previous measures an athlete can face a doping charge.

More than 30 athletes, including double European 100 metres hurdles champion Nevin Yanıt, had been suspended by the Turkish federation for doping in 2013, according to Reuters.

Another Turkish long-distance runner Elvan Abeylegesse was one of the 28 athletes whose revisited samples have tested positive for doping, the Turkish Athletic Federation said late Thursday. According to the federation, Abeylegesse has been asked by athletics governing body IAAF to provide a defence regarding positive samples from 2007, the year she won the silver medal in the 10,000 metres at the world championships in Osaka, Japan.

Abeylegesse has not had her silver medal withdrawn but this is the likely eventual outcome should she be found guilty of doping. The IAAF said Tuesday that 28 athletes had submitted 32 adverse findings in doping retests of samples from the 2005 and 2007 worlds.