US will examine Turkish wrestler's anatomy 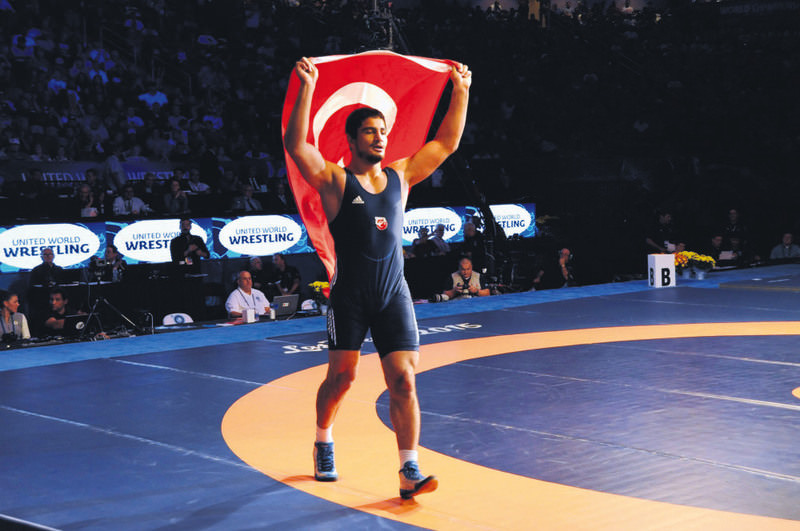 by daily sabah
Oct 02, 2015 12:00 am
Wrestling authorities in the U.S. will examine the anatomy of Turkey's Taha Akgül, who won the gold medal in the men's 125-kilogram freestyle category at the 2015 World Wrestling Championship as well as the European Championship. In recent years, Akgül has made an international name with his success and draws the attention of the U.S., where Smackdown programs featuring different wrestling techniques breaks rating records and heavyweight sportsmen are shown particular interest. The U.S-based wrestling authorities follows Akgül's performance with admiration as he can move as fast as a wrestler weighing 57 kilograms although his weight is 125 kilograms (275 pounds).

Speaking to an Anadolu Agency (AA) reporter, Akgül said that he became European champion for the last 4 years and won two world championships. He also wants to honor Turkey with his performance at the 2016 Rio Olympic Games. Akgül said that the U.S. shows more interest to him compared to Turkey. "I wrestled with discipline from the first to the last match. I took it very serious. Fortunately, I crowned my performance with gold medal and our anthem was sung there," he said. Akgül said that U.S. authorities follow wrestling competitions. "Heavyweight wrestlers appear in their smackdown programs and they discovered my exceptional speed. They want to integrate it to their own sportsmen following physical examination. Their offer is proud for both me and Turkey," he added. Akgül now fully focuses on the 2016 Rio Olympic Games and is open for other offers in following terms. Akgül beat Azerbaijani wrestler Jamaladdin Magomedov 10-0 in the final at the World Wrestling Championship held in Las Vegas from Sept. 7 to Sept. 12. Taking only 62 seconds to capture his second straight world title, Akgül became the world champion.