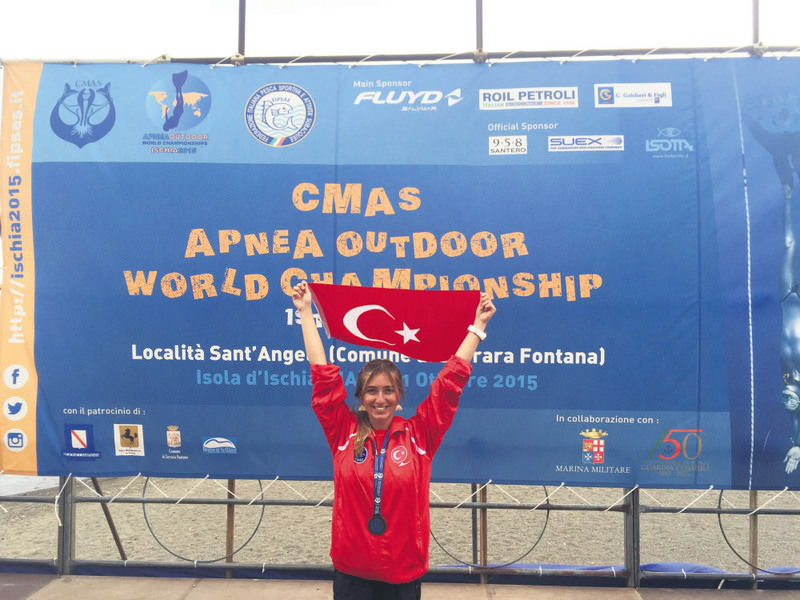 by daily sabah
Oct 08, 2015 12:00 am
Turkish athlete Şahika Ercümen won the bronze medal in the World Diving Championship in the free-diving category. In the competition held on the Ischia Island of Italy, Ercümen broke the Turkish record that belongs to herself in the variable-weight free-diving by reaching a depth of 80 meters.

Ercümen said, "Our main purpose in the championship was to win a medal. So, I decided to achieve a rank that won't make me sweat too much in order to guarantee our main purpose. I'm proud of earning a medal for my country anyway. Within two weeks we will try a new record in a different category. It is very hard to achieve high performances in short periods."

In July, 2014, Ercümen broke the world record in the variable-weight free-diving by reaching a depth of 91 meters. Ercümen, who is a member of the Middle East Technical University Underwater Sports Club, made her record off the Kaş shore in Antalya without the aid of an oxygen tank and flippers. Previously, Derya Can set the record by diving to 90.2 meters. Ercümen is known as one of the most successful free-divers and underwater hockey players in the world.

In 2006, she shattered the Turkish record at the Free-Diving World Championship held in Tenerife, Spain. Later, she set another Turkish record at the National Dynamic Apnea (a category of free-diving) Championship that took place in the Middle Technical University Pool between May 26 and May 27 in 2007. She reached 143.5 meters with a single breath. Ercümen ranked third in Europe with the Turkish underwater hockey national team in 2008. She also ranked fourth at the Free-Diving European Championship despite carrying injuries. In 2009, she was the free-diving champion of Turkey. Ercümen achieved another Turkish record in 2010, which was very close to this year's free-diving world record.