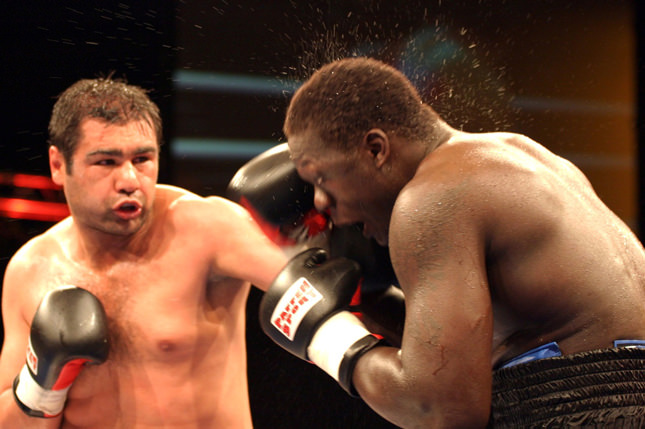 by Ismail Hasan Bulur
Oct 19, 2015 12:00 am
Known as the "Bull of the Bosporus," the former EBU, World Boxing Council, and WBC Mediterranean heavyweight champion, Sinan Şamil Sam is currently under intensive care for liver failure.

Sinan Şamil Sam, now at age 41, first entered intensive care after he was hospitalized for liver failure five years ago in December 2015 due to excessive alcohol consumption.

Sam was hospitalized in 2010 in Ankara after vomiting blood and was rushed to the 29 Mayıs Hospital.

Since then the former world champ has been battling an alcohol addiction that has left him in need of a liver transplant. He has been waiting for almost five years now. Turkey's Ministry of Sports and Health is currently still in search of a suitable donor.

A written statement was issued by the hospital he is currently receiving treatment in stating that even though the Sam's condition has improved since the day he entered the hospital, he is still in critical condition.

Visitors are not allowed into Sam's room as his condition is still being treated by doctors.

As an amateur Sam was won the Turkish Boxing Championship nine times.

In 1992 he placed second as a Middleweight in the Junior European Championships in Edinburgh, losing to Vassiliy Jirov. In the same year he won the Light Heavyweight Junior World Championship in Montreal.

He placed second in the Light Heavyweight division at the European Championships in Bursa, Turkey.

Sam went on to win the World Boxing Championships in the Super Heavyweight division in Houston in 1999.

The "Bull of the Bosporus" won the EBU heavyweight title in 2002 after defeating Przemysław Saleta by TKO. He held the title for nearly two years before losing it to Luan Krasniqi via unanimous decision.

Sam went on to win the WBC International Heavyweight title in late 2004 defeating Denis Bakhtov by technical knockout. He then twice defended his WBC title in 2005 against Lawrence Clay Bey and Okello Peter before losing it to Oleg Maskaev by unanimous decision. Sam retained the title yet again in 2006 holding it for over a year.