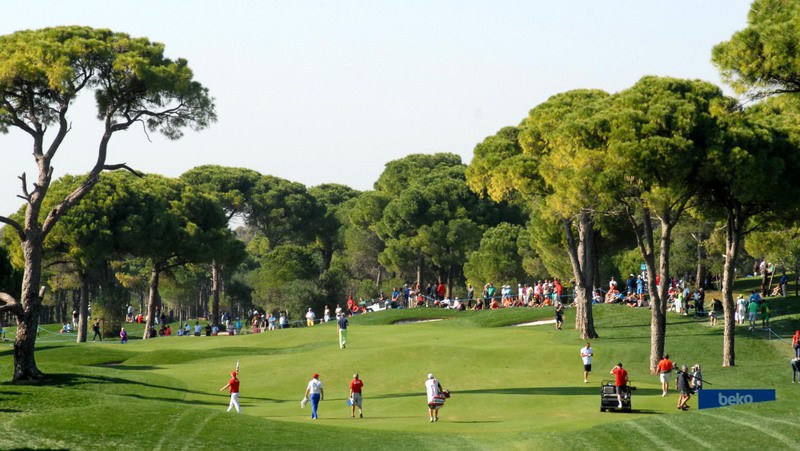 Offering $30.5 million in prize money, the Turkish Airlines Open is the most exciting tournament to have been added to the European Tour calendar in recent years. Antalya's Belek hosted the tournament.
by daily sabah
Nov 02, 2015 12:00 am

While the Turkish Airlines Open will continue as part of the European Tour's Final Series for at least another three years, KPMG's extensive research revealed the potential for golf to continue to grow in Turkey as more courses and facilities are created

Turkey was named as a "rising star'" among golf destinations in a recent KPMG report released during the 2015 Turkish Airlines Open. KPMG is a professional service company, being one of the Big Four auditors, along with Deloitte, EY and PwC. Following a phenomenal surge in Turkey's golf tourism over the past decade, the report revealed the details of Turkey's growth at an event at the Maxx Royal hotel in Belek, Turkey.

KPMG's extensive research revealed that golf has played a pivotal role in the remarkable growth of tourism in Turkey, particularly over the last decade. It also outlined the potential for golf to continue to grow in this fertile marketplace as more courses and facilities are created.

Turkey has moved from 12th in the world in 2004 to sixth in 2014 in terms of the number of tourists the country welcomes. The country now receives 12 percent of its GDP through the travel and tourism sector, and golf is playing an increasingly significant role in Turkey's appeal to tourists. The report states: "Turkey has led the way among emerging markets in developing a competitive and attractive golfing offering."

The report revealed that golf in Turkey remains focused on the area known as the "Golf Coast," which is located around Antalya. Belek has become particularly popular and is an area that has experienced "extraordinary growth" in the past ten years compared to the rest of Europe. Since 2004 the number of golf clubs in the area has tripled, and the number of rounds played is now over two and a half times higher. In 2014 an extraordinary 513,000 rounds of golf were played the in the region and KPMG found that Belek now ranks as the top performing golf destination in the Mediterranean.

The growth of the game in Turkey, although primarily fueled by tourism, is also stimulating golfing talent among Turkey's population - in particular with younger golfers. The Turkish Golf Federation has a 45 percent junior membership - the highest proportion of young players of any federation in Europe.

The report also predicted that Turkish golf is likely to continue on this journey of rapid growth. 75 percent of key market players expect to report a good or excellent year in 2015.

This week it was announced that the Turkish Airlines Open will continue as part of the European Tour's Final Series for at least another three years, and Turkish Airlines will remain the headline sponsor. As well as supporting this flagship international tournament Turkish Airlines, the national carrier, also supports many other golfing events in the country and is a driving force behind the country's golfing development.

Ahmet Ağaoğlu, the president of the Turkish Golf Federation, said: "It has been my pleasure to see the growth of this great sport in my country over the past few years. The report's findings are no surprise to me, as I see every day the enthusiasm and excitement people get from playing golf in this beautiful country. I look forward to seeing the continued growth of Turkey as golf's Rising Star."

The global head of sport at KPMG, Andrea Sartori, said: "Our findings show that Turkey has great development potential. With a progressing tourism industry, fantastic climatic conditions, a highly successful junior program, and the commitment of stakeholders and sponsors to continue to support the game, golf in Turkey looks to have a very bright future."

As for the Turkish Airlines Open, Rory McIlroy admitted he needed to dig deep to register a third consecutive 67 and get within one shot of the lead heading into the final round of the Turkish Airlines Open. The Race to Dubai leader was level par for when he dropped a shot on the tenth but he then came to life, picking up four strokes in his next four holes with the help of a brilliant eagle on the 13th.

The four-time Major winner then picked up another birdie on the last to get within a shot of Victor Dubuisson and Jaco Van Zyl.

"I needed to play well coming in here for this 67," he said. "I got off to a bit of a slow start, I don't know why. I just felt very lethargic out there today. I couldn't really feel any energy."

"To finish the way I did was very pleasing and I'd say this was the best of them just because I didn't get off to a great start and I needed to dig in deep and finish the round off well, which I did."

While McIlroy made a birdie on the last hole, Kiradech Aphibarnrat dropped his only shot of the day to drop into a share of second at 15 under with the Northern Irishman. The Thai is searching for his third title of the season after wins at the Shenzhen International and Saltire Energy Paul Lawrie Match Play and insists he will not change his game plan with the World Number Three in contention. Byeong-hun An carded a low round of the day 65 to get to 13 under as he made nine birdies and two bogeys on his way round at The Montgomerie Maxx Royal. The BMW PGA Championship winner is a contender for the Sir Henry Cotton Rookie of the Year award and is enjoying his first taste of The Final Series.
Last Update: Nov 02, 2015 1:05 am