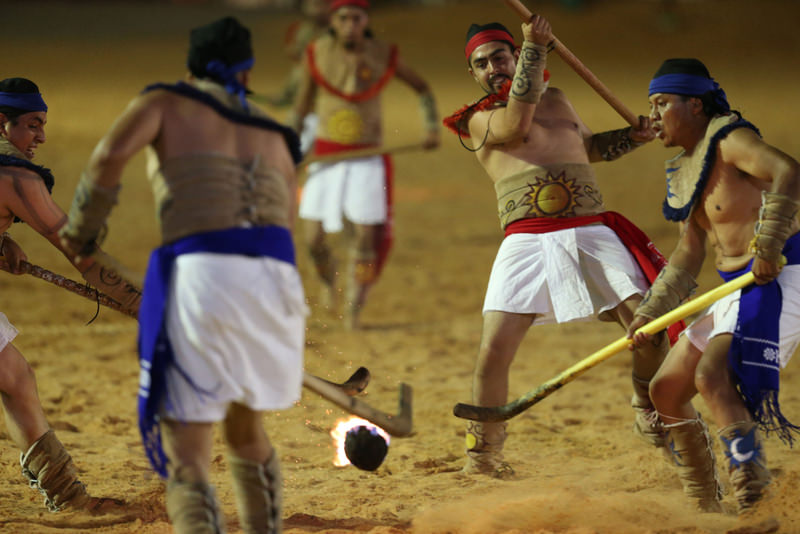 by Associated Press
Nov 02, 2015 12:00 am
The first World Indigenous Games closed Saturday night with a pumping ceremony that brought together nearly 2,000 participants from more than two dozen countries for a monumental extravaganza.

Nothing quite like it had ever rolled into Palmas, a sunbaked outpost in the geographical heart of Brazil, and the 5,000-seat arena was packed well beyond capacity for the spectacle.

With delegations from as far afield as Ethiopia and New Zealand and two dozen indigenous peoples from across Brazil, the games produced nine frenetic days of competition in traditional sports, dancing, singing, commercial and cultural exchange and a dose of politics.

"This is an eye-opener for us," said Felicia Chischilly, a Navajo from New Mexico who was among 19 delegates from the United States. "It's a pow wow in the true sense of the word a gathering of nations."

Brazilian President Dilma Rousseff was notably absent from the closing ceremony after being booed at the Oct. 21 opening spectacle by demonstrators angry over a land demarcation proposal they say would be catastrophic for Brazilian natives' traditional ways of life. Participants complained that chronically chaotic organization hampered the event, and some critics contended the $14 million that the federal government poured into the games would have been better spent on health and education for Brazil's beleaguered indigenous peoples. Antonio Apinaje, a leader of the Apinaje people, dismissed the games as a circus. "We see this whole thing as a tool to pull the wool over our eyes," said Apinaje, who declined to take part despite living in the host state of Tocantins.

Billed as a sort of indigenous Olympics, the games featured sports that tend to form part native peoples' traditions, from goggle-less river swimming to log races. Saturday saw the finals in canoeing, spear throwing and dramatic archery events. An archer from the diminutive Aeta people of the Philippines opened Saturday's archery competition, but it was a towering Mongolian in velvet robe, leather quiver hanging jauntily from his hip, that really caught the crowd's eye.

Egged on by the grimacing Maori, performing their fierce haka, indigenous supporters flooded the arena during the final moments of a titanic battle in the women's tug-of war between the local Gaviao people and the Maori, who ultimately prevailed. The day's most arresting sporting moment came with a demonstration of a traditional Mexican game, a high-stakes variation on field hockey played with a giant flaming puck. The next edition of the games will be held in Canada in 2017.
Last Update: Nov 02, 2015 1:48 am