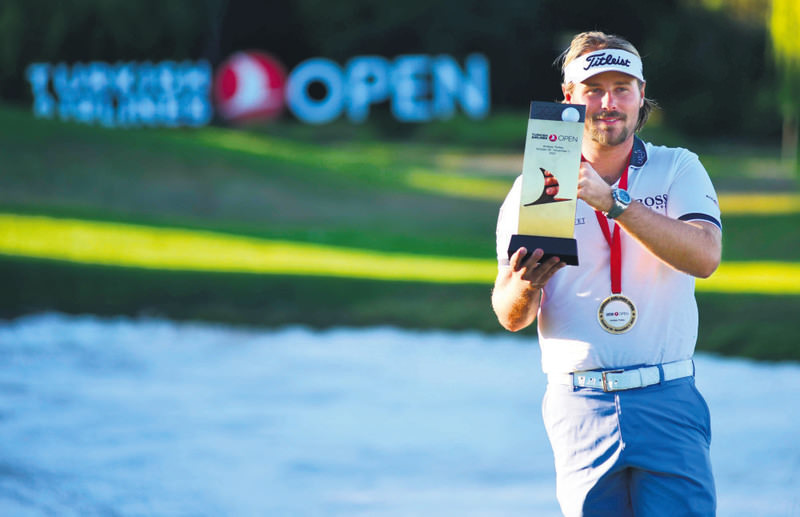 by daily sabah Nov 03, 2015 12:00 am
Victor Dubuisson produced an entertaining win at the Turkish Airlines Open, providing a fitting climax to a fantastic week of golf at the Montgomerie Maxx Royal in Belek. Dubuisson overhauled South African Jaco Van Zyl with birdies on the last two holes to retain the title he won previously in 2013. He began his round brilliantly, with three birdies in his first four holes, but a double bogey five on the fifth sent him back down the leader board. His eventful round continued with a magical shot from the trees on the 10th to save par, followed by an eagle three on hole 11. The Frenchman still trailed Van Zyl by one shot as they played the 17th, but a superb putt for birdie brought him back on level terms, and a magical second to 18 set him up for another birdie - and the title. Dubuisson said: "This win means a lot because I haven't had a great season so far and to win here, and put me back in the top 10 of the Race to Dubai, it's really great."

Four-time major winner Rory McIlroy endured a frustrating day, having begun his round just one shot off the lead. He dropped shots on holes eight, nine and 12 saw him fall away from contention - and despite his best efforts he was unable to produce enough magic on the back nine to really challenge the leaders.

The Turkish Airlines Open was once again a fantastic showcase of the stunning golf in the country, with every round played in perfect weather conditions. The tournament was a perfect example of why Turkey was named as golf's "rising star" in a report issued by KPMG during the tournament earlier this week.

Also announced this week was the news that the Turkish Airlines Open will continue as part of the European Tour's Final Series for at least the next three years, with Turkish Airlines - the national carrier - remaining as the headline sponsor. Next year Turkey's flagship tournament will be hosted at Carya Golf Club, also part of the country's incredible golf coast.

Ilker Aycı, Chairman of the Board of Turkish Airlines said: "It has been another phenomenal week of golf here in Belek, and we would like to offer our sincere congratulations to Victor - who is certainly a deserved champion. This tournament continues to be a superb way to showcase Turkey's fantastic offering to golf fans from all over the world. We are very excited to continue to support the Turkish Airlines Open, and golf across the world, into the future."
RELATED TOPICS