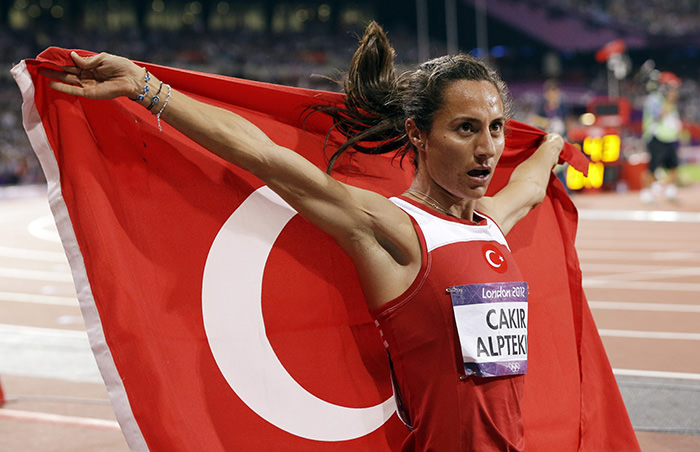 Asli Cakir Alptekin celebrates her gold medal in the women's 1500-meter during the athletics in the Olympic Stadium at the 2012 Summer Olympics, London (AP Photo)
by Daily Sabah with AP
Nov 06, 2015 12:00 am

In one of the most serious scandals in recent sporting history, the former head of world athletics Lamine Diack's son Papa Massata is accused of demanding more than $500,000 payments to cover up doping offences by Turkish athlete Aslı Çakır Alptekin

The corruption scandals from football to athletics have overlapped into Turkish athlete Aslı Çakır Alptekin's doping case. While President of the International Association of Athletics Federations (IAAF) Lamine Diack is being investigated over receiving alleged payments of nearly $1 million to cover up doping offences by Russian athletes, his son Papa Massata is also accused of demanding $530,000 from Alptekin to close the file that implicated her in doping offences. On Thursday, reports in France returned to an allegation made originally by the German broadcaster ARD last December that money extorted from athletes to protect them from exposure as cheats was laundered through a company in Singapore with links to Diack's family.

But athletics chiefs are bracing themselves for the possibility that the French police investigation into former IAAF president Diack and two other senior officials goes way beyond that. As one leading source told Sportsmail: "If this has been an effective criminal operation to run this kind of scam, as is being alleged, you have to believe it's a possibility that it will lead beyond athletes from Russia."

The report published on Thursday by Lyon Capitale – a magazine based in the French city where the international police organization Interpol has its headquarters – claimed that Turkish middle-distance runner Alptekin was also a target for blackmail.

Alptekin won gold in the 1,500 m at the London Olympics only to then be hit with an eight-year ban for doping in July 2015. She was stripped of her Olympic title.

Lyon Capitale claims Diack's sons, former IAAF marketing chief Papa Massata and Khalil, requested $530,000 from Alptekin in November 2012. Only after refusing to pay, claims the magazine, was she exposed as a cheat.

In August, the Switzerland-based Court of Arbitration for Sport (CAS) ratified a settlement agreement that will keep Alptekin out of any sport competition for eight years because of her doping offences. According to the court's release on its official website, the agreement was reached between IAAF and the respondents, the Turkish Athletics Federation and Alptekin.

This means that Alptekin has lost the gold medals she won in 2012 Summer Olympics in London, 2012 European Athletics Championships and 2011 Summer Universiade in Shenzhen, China. She has also lost her bronze medal that she won in the 2012 IAAF World Indoor Championships in Istanbul.

Earlier this week it emerged that Diack, former IAAF anti-doping chief Gabriel Dolle and former IAAF legal adviser Habib Cisse were under investigation amid allegations that they received payments in excess of $908,000 to cover up positive drugs tests of Russian athletes.

It emerged on Thursday that the IAAF, perhaps sensibly under the guidance of new president Sebastian Coe, have responded to the worst crisis in athletics history by cancelling their lavish annual gala in Monaco later this month. And it was perhaps just as well when five more Russian athletes were banned for drugs offences.

The suspensions were announced by the under-fire Russian Athletics Federation, with a statement confirming that three athletes had been banned as a result of information received from the Russian anti-doping agency. The other two were disqualified on the basis of the documents received from the IAAF.

One of the most serious scandals in sporting history erupted on Wednesday after French police confirmed that the former head of world athletics Lamine Diack is being investigated over receiving alleged payments to cover up doping offences by Russian athletes. Diack's son, Papa Massata Diack, stepped down from his role as an IAAF marketing consultant, and the head of Russia's athletics federation, Valentin Balakhnichev, also resigned from his role as IAAF treasurer. Dr Dolle, the director of the IAAF medical and anti-doping department, also left the federation after being questioned by its ethics commission.
Last Update: Nov 06, 2015 5:11 pm