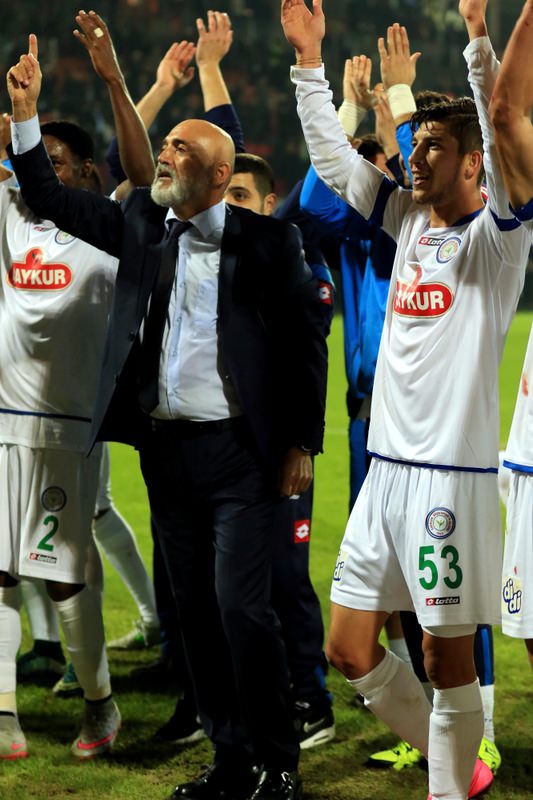 by Hakan Baş Nov 09, 2015 12:00 am
On Saturday Turkish football fans witnessed a rare event: Çaykur Rizespor beat powerhouse Galatasaray 4-3 after falling behind 2-3 earlier in the game. Galatasaray, who were recently stunned by Benfica in a 2-1 loss, were shocked again three days later against Çaykur Rizespor. The host team beat Galatasaray thanks to the two goals they scored in stoppage time. After the match Çaykur Rizespor's coach Hikmet Karaman said the rivals probably underestimated them, saying, "Anatolian teams like us have a small chance of beating powerful Istanbul teams such as Fenerbahçe, Beşiktaş and Galatasaray. There is a big imbalance between Anatolian and Istanbul teams. Of course, I'm happy for the win. Galatasaray probably underestimated us. And they may have been a little tired after the match they played against Benefica on Wednesday. We also won with a bit of luck. But, this is a historic win."

Galatasaray coach Hamza Hamzoğlu accused the referee of showing an unjustified card: "Although the decisions made by the referee did not directly change the score, the first yellow card shown to Umut Bulut was wrong. We overcame these difficulties and went ahead 3-2 but were defeated due to the goals we conceded in extra time. We lost because of the incredible mistakes we made in the final minutes. We should have kept the ball in-bounds. And we also had difficulties after Selçuk İnan got injured."
RELATED TOPICS