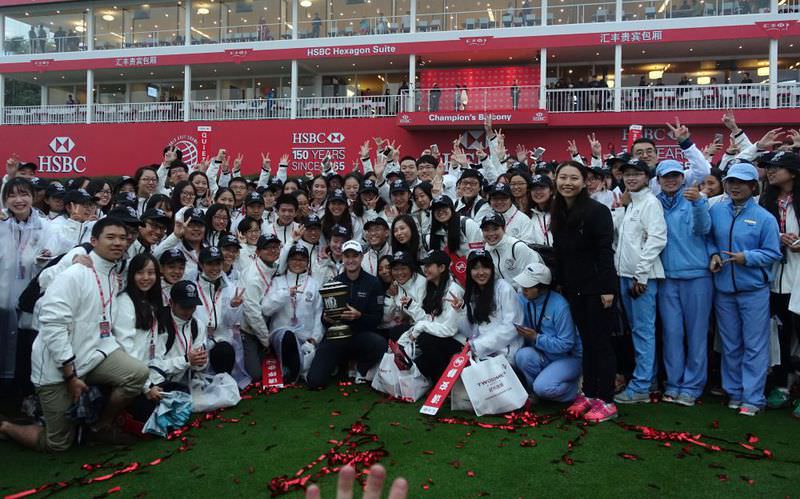 Russell Knox of Scotland (C) poses with his trophy after winning the WGC-HSBC Champions golf tournament in Shanghai yesterday.
by Nov 09, 2015 12:00 am

Russell Knox secured a notable two-stroke victory at the WGC-HSBC Champions tournament. The 30-year-old is the first Scottish golfer to win a WGC and had six birdies in a four-under 68 to finish 20 under par

Russell Knox became the first Scotsman ever to win a World Golf Championships event when he held off a world-class field for a two-stroke victory in Shanghai on Sunday.

His final round four-under par 68 at the $8.5 million WGC-HSBC Champions gave him a total of 268, 20-under par. Kevin Kisner of the U.S. was second on 270, while English pair Danny Willett and Ross Fisher tied for third a further stroke behind.

Knox started the day at 85th in the world golf rankings and could now move into the top 30 when the new standings are announced on Monday.

The 30-year-old from Inverness, who is based in the United States and plays solely on the U.S. PGA Tour, still had to play the final hole of his third round early Sunday after walking off in bad light after dusk on Saturday at Sheshan International Golf Club.

It proved a timely decision as, with weather conditions more benign, he picked up a birdie four to move into a share of the lead.

He carried the momentum through to the final round to card six birdies and two bogeys en route to his maiden victory and the $1.4 million winner's cheque - by far the biggest pay day of his career.

"It sounds unbelievable but I always kind of thought I was going to win a big one for some reason as my first one," said Knox, referring to the fact that the four WGC events rank second only to majors on the golf calendar and the WGC-HSBC Champions is known as "Asia's major."

"I've been close a few times before. But this is going to take a long time to sink in."

Jordan Spieth had charged into contention on Saturday with a nine-under round of 63 but could not back it up in cooler conditions Sunday.

He finished with a two-under 70 for a share of seventh place on 15-under par along with Chinese 20-year-old sensation Li Haotong.

Masters and US Open champion Spieth will at least have the consolation of moving back to world number one in the new rankings Monday, leapfrogging Australia's Jason Day who skipped Shanghai to be at the birth of his second child.

"[Getting back to number one] was certainly a goal coming into this week," Spieth said after his round. "When that number one ranking slips away, it leaves some unrest in you and you really want to get back at it."

Spieth said even he was amazed at the winning score after a week in which the course was soaked by rain and buffeted by swirling winds on Friday.

"To shoot 20-under here is ridiculous in the conditions we had," said Spieth. "You know, everyone is pushing each other a little bit. Golf's in a great place. Guys are playing better than ever it seems."

Li had a torrid start to his final round in which he played alongside Spieth.

A double bogey and three bogeys in his first five holes could have seen him sink without trace, but Li showed his maturity by clawing back to a level-par round of 72 including a chip-in for par at the ninth that resulted in the biggest cheer of the day from his packed home galleries.

"Man, did he have heart," said Spieth in tribute to Li.

"It was unbelievable some of the stuff he was pulling off.

"At one point I looked up at (caddie Michael) Greller and said, 'Man, I feel like I'm beating him by eight shots today and we're tied for the tournament."
RELATED TOPICS