Manchester United crash out of Champions League at Wolfsburg 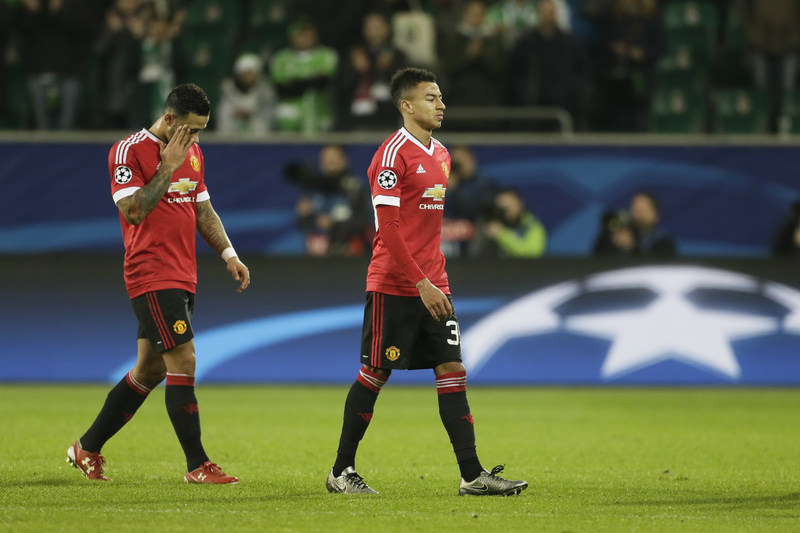 by German Press Agency - DPA
Dec 09, 2015 12:00 am
Manchester United's Champions League campaign ended with a 3-2 defeat at Wolfsburg Tuesday as PSV Eindhoven won 2-1 at home to CSKA Moscow to eliminate Louis van Gaal's side in the final round of group stage games.

Anthony Martial opened the scoring early but Naldo promptly equalized and a glorious team goal, finished by Vieirinha, put Wolfsburg in front. An own goal from Joshua Guilavogui levelled for United in the last 10 minutes but Naldo restored the lead to earn Wolfsburg top spot in Group B.

Wolfsburg's celebrations briefly turned to concern as a message on the scoreboard asked fans to remain in the stadium after full time for safety reasons.

However, a police spokesman later said this was a "purely precautionary" measure after a suspicious package had been found in a stadium car park.

PSV recovered from a goal down to defeat bottom club CSKA and claim second, sending United into the Europa League in third.

Manchester City topped Group D thanks to a come-from-behind 4-2 win against Borussia Moenchengladbach, who finished bottom. Europa League holders Sevilla secured a return to that competition by beating Juventus 1-0.

United went in front when Juan Mata was given too much time in midfield and his pass split the Wolfsburg defence to find Martial, who finished calmly in the 10th minute.

And the hosts went in front in 29 minutes when Vieirinha tapped in at the end of a dazzling team move. Schuerrle spread the play to Julian Draxler on the right flank and, after a one-two with Max Kruse, the young midfielder surged into the box to supply his colleague.

United grabbed a lifeline when Guilavogui nodded a header from Marouane Fellaini into his own net in the 82nd but Naldo powered home a corner to win the tie and end the three-time winners hopes of progressing.

"It is difficult for us," Fellaini said. "We are disappointed ... we should defend better."

United's loss meant that PSV simply had to avoid defeat against bottom club CSKA and they survived a nervous finale to do so.

Sergei Ignashevich scored for CSKA with a 76th minute penalty but Luuk de Jong levelled in 78 and Davy Proepper struck late to ensure PSV went through.

Wolfsburg topped the group 12 points with PSV on 10, jumping United who ended on eight.

"The team has done an excellent job," Wolfsburg coach Dieter Hecking said. "I hope that we can take the consistancy from the Champions League into the Bundesliga."

Manchester City trailed Borussia Moenchengladbach at half time as Julian Korb and Raffael cancelled David Silva's opener. However, a three-goal burst in the last 10 minutes on a double from Raheem Sterling, on his 21st birthday, and a strike from Wilfried Bony secured victory.

That was enough to earn top spot on 12 points from Juventus on 11, as the 2015 finalists lost 1-0 at Sevilla. Keeper Gianluigi Buffon made several saves but was eventually beaten by former Juve striker Fernando Llorente's looping header from a corner.

"It's brilliant (to top the group), we worked hard, we deserve it," Sterling said. "We made it hard and difficult at times but we won today and showed character and hopefully now we can carry it on into the next stage."

Sevilla, 2014 and 2015 Europa League champions, return to that tournament on six points with Gladbach left on five.

"We knew that for us it was a final and we came out onto the pitch in a fantastic way," said Llorente. "We have showed the level of this side and we are happy to go into the Europa League."

Joining them there from Group C will be Galatasaray, who needed an equalizer from Burak Yilmaz to get the draw they needed against Astana to finish third. Patrick Twumasi had opened the scoring for the Kazakhs.

Real Madrid were already confirmed as group winners but turned in a champagne performance as Ronaldo bagged four goals against hapless Malmo to end the group stage on 11 goals, a new record total.

Karim Benzema scored a quick brace before Ronaldo struck once before the break and then three times in quick succession in the second half. Mateo Kovacic fired home before Benzema also completed his hat-trick.