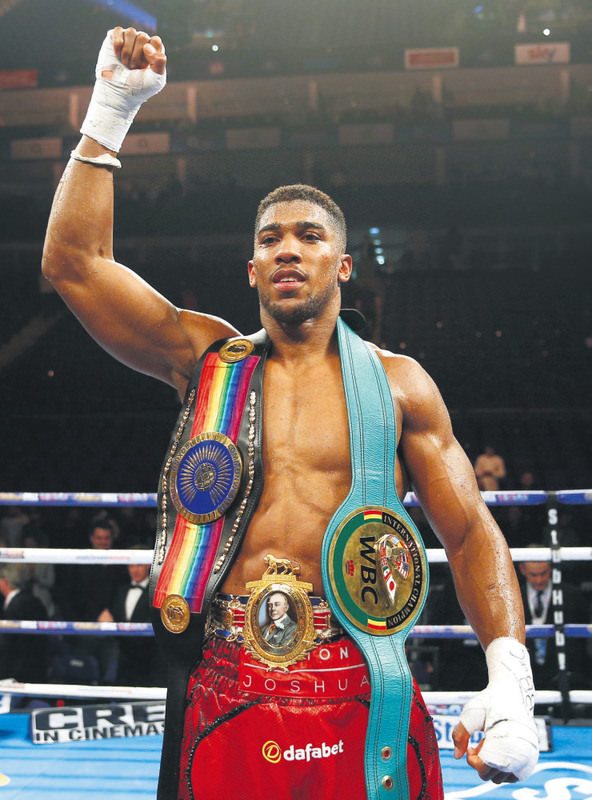 by Dec 14, 2015 12:00 am
Olympic champion Anthony Joshua (above) defeated former kick-boxer Dillian Whyte to take the British heavyweight title on Saturday with a bruising seventh-round knockout and edge closer to a possible shot at the world crown.

The 26-year-old took his record from 15 fights to 15 knockouts since turning pro after winning the 2012 Olympic gold in London.

Joshua's latest win raises the prospect of a clash with WBO and WBA heavyweight champion Tyson Fury, if his fellow British fighter beats Wladimir Klitschko in their world title rematch.

"Yes I enjoyed it, more because it was about bragging rights," said Joshua, who had lost to Whyte in 2009 during their amateur careers.

"There has been a lot of talking, since all the way back in 2009. We'd been patiently waiting for this moment and I enjoy being victorious and showing that talk is cheap; you have to back it up when you're in the ring."

"He was tough, there were times when I hurt him in the first round and he hurt me in the second. It was a matter of who had slightly more grit, determination and skill."

Saturday's fight was the first time Joshua had advanced beyond the third round in his professional career.

"I took myself past three rounds and felt that I carried the right engine through the fight," he added. "Even when I had been loading up and doing silly things, I still had enough power to knock him out in the seventh."
RELATED TOPICS