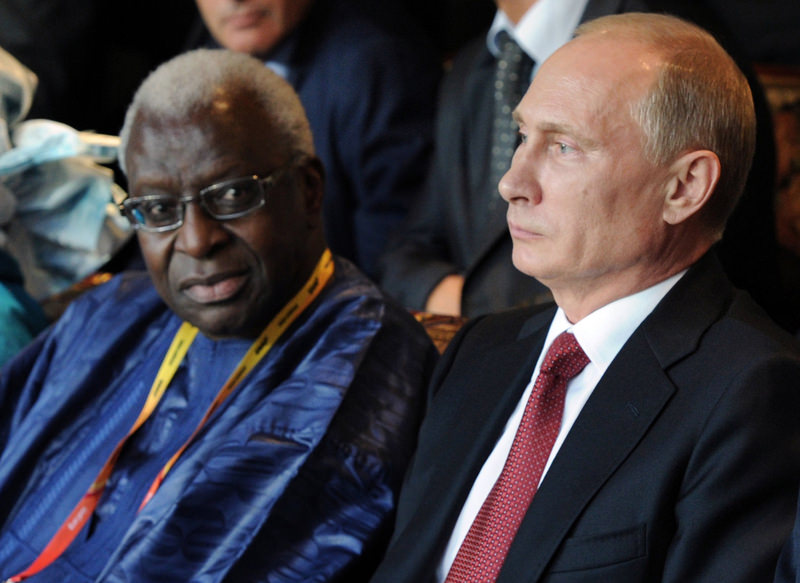 Russian President Vladimir Putin and IAAF President Lamine Diack attend the opening ceremony for the World Athletics Championships at the Luzhniki Stadium in Moscow in Aug. 10, 2013.
by daily sabah Jan 15, 2016 12:00 am

According to the the commission's second report into corruption and doping in athletics, former boss of athletics Lamine Diack struck up a friendship with Russian President Putin, and helped to cover up nine positive tests by Russian athletes

Corruption within the world athletics body IAAF was not a result of renegade individuals' actions but was embedded in the organisation, the head of an independent commission on doping in athletics said in his report, according to the Associated Press. The World Anti-Doping Agency's (WADA) former president, Dick Pound, who heads the commission into corruption and doping in athletics, set up after reports by the German broadcaster ARD and the Sunday Times last year, presented the report in Munich.

"The corruption was embedded in the organisation. It cannot be ignored or dismissed as attributable to the odd renegade acting on his own," Pound said in his report, the first part of which, in November, presented evidence of state-sponsored doping in Russia. He said the IAAF needs to be restructured as the corruption "cannot be blamed on a small number of miscreants".

According to the AP, the report also says Lamine Diack struck up a friendship with Russian President Vladimir Putin, and that the IAAF helped to cover up nine positive tests by Russian athletes ahead of the 2013 World Championships in Moscow. While the athletes did not compete, their positive doping tests were not pursued further by the athletics body, it says.

The sport has already been thrown into turmoil by the first part of Pound's report, and by French authorities placing former IAAF president Lamine Diack under formal investigation on suspicion of corruption and money laundering. Diack's son Papa and two Russian officials were last week banned from athletics for life by an IAAF ethics board for covering up an elite Russian athlete's positive dope test and blackmailing her over it.

French prosecutors are investigating Lamine Diack, his lawyer Habib Cisse, Papa Massata Diack and Gabriel Dolle, the IAAF's former anti-doping director, on suspicion of corruption, and will also give an update on their investigation on Thursday, after the WADA commission's news conference. The accusations of systematic, state-sponsored doping and related corruption detailed in Pound's first report led to the IAAF banning the Russian athletics federation from the sport. Pound has said IAAF President Sebastian Coe, a vice president for seven years until his election last year, and fellow vice president Sergey Bubka.
RELATED TOPICS