Russian track and field federation not to be reinstated, ban to remain 'at this stage': IAAF 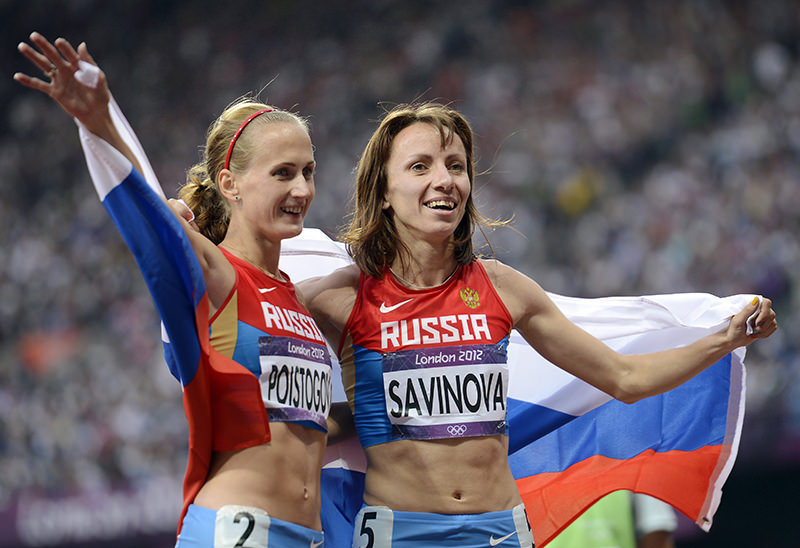 Both athletes are among the five Russian runners targeted for a lifetime ban recommended by an independent World Anti-Doping Agency (WADA) commission. (EPA Photo)
by Associated Press Mar 11, 2016 12:00 am

Russia's track and field federation has not yet done enough to reform its anti-doping program in order to have its athletes reinstated to global competition, the IAAF said Friday.

The sport's world governing body said it will likely decide in May whether Russian athletes will be readmitted or not in time for the Olympics in Rio de Janeiro in August.

IAAF President Sebastian Coe made the announcement at the end of a two-day council meeting in Monaco, saying the Russian federation, known as RUSAF, had not yet satisfied the conditions for reinstatement.

"While progress has been made, the council unanimously agreed that the Russian authorities need to undertake further significant work to satisfy the reinstatement conditions," Coe said. "RUSAF should not be reinstated to membership of the IAAF at this stage. The task force will report at the next council meeting."

The next meeting will held on an unspecified date in May, where a final decision is likely to be made on whether Russian athletes will be eligible to compete in Rio.

"I think you should conclude that these decisions will be taken at that point," Coe said.

The IAAF suspended Russia in November after an independent report by a World Anti-Doping Agency panel detailed systematic corruption and doping cover-ups in the country. The IAAF laid down a series of criteria for the Russians to meet before they can be eligible for readmission.

Rune Andersen, head of the IAAF task force on Russia, backed Coe's assessment that Russia still has a long way to go.

"One criteria which is very, very important, is changing the culture of doping in Russia," he said. "It's a first job that needs to be done."

Of Russia's track and field medalists at the 2012 London Olympics, eight have since either served doping bans or are provisionally suspended

In addition to the IAAF's requirements, WADA still needs to declare Russia's national anti-doping agency and anti-doping lab compliant with its rules before the country can return to the international fold.

WADA's initial report was made following allegations made in a documentary by German broadcaster ARD.

The program featured a Russian whistleblower, 800-meter runner Yulia Stepanova, who helped expose the doping scandal. She is hoping be allowed to compete at the Olympics, possibly under a different flag. Stepanova and her husband, a former anti-doping official, left Russia in 2014 after providing undercover footage of apparent doping violations for ARD's documentary.

"The council will also ask the taskforce to consider the eligibility of Yulia Stepanova to compete in international competition," Coe said.

ARD aired another documentary Sunday, in which Russian coach Vladimir Mokhnev was accused of continuing to train athletes while he serves an IAAF suspension. The program alleged another coach offered banned substances for sale and that the acting head of the Russian anti-doping agency had allowed an unidentified athlete to reschedule a supposedly no-notice drug test.

During his news conference, Coe also said that Ethiopia, Morocco, Kenya, Ukraine and Belarus are in "critical care" and must seriously improve their anti-doping programs.

"Ethiopia and Morocco (both) need to implement as a matter of urgency a robust and adequate national testing program both in and out of competition," Coe said. "Kenya, Ukraine and Belarus have been put on an IAAF monitoring list for 2016 to ensure their anti-doping programs are significantly strengthened and their journey to compliance completed by the end of this year."

Coe said "serious sanctions" against them would only happen "if they don't comply with council requirements."

Like Russia, Kenya is in the midst of a doping crisis, with more than 40 track athletes failing drug tests since 2012 and four senior track officials suspended by the IAAF for "potential subversion of the anti-doping control process in Kenya."

The IAAF is also investigating Ethiopia's track program. Three Ethiopian runners have been suspended on suspicion of doping amid a string of positive tests among the country's athletes, and the Ethiopian Anti-Doping Agency told The Associated Press recently that at least nine athletes were under suspicion.