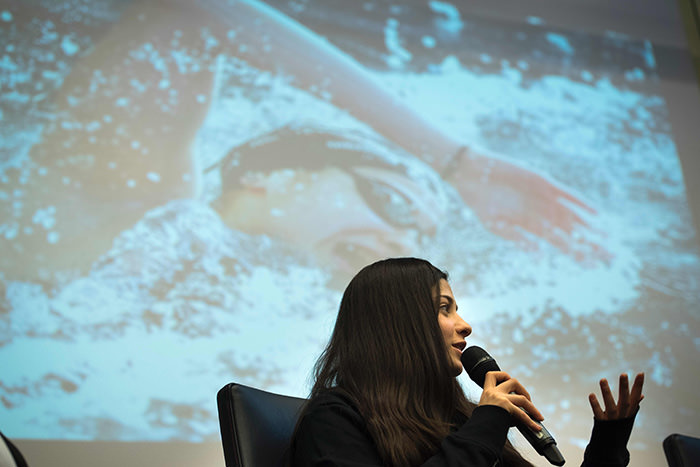 One year after swimming for her life in Greek coastal waters, Syrian refugee Yusra Mardini could be swimming at the Olympics.

The 18-year-old is hoping to be selected for a small team of refugees that will compete under the Olympic flag in Rio de Janeiro in August.

"I want refugees to be proud of me," Mardini said Friday. "I just want to encourage them."

She fled Damascus with her older sister Sarah last August and survived a hazardous crossing on the Aegean Sea to reach Europe.

Now she trains at a pool built for the 1936 Olympics in Berlin. She is among 43 refugees from different countries in contention for the International Olympic Committee's "Refugee Olympic Athletes" team, which is likely to consist of between five to 10 members.

"We help them to make their dream of sporting excellence come true, even when they have to flee war and violence," IOC President Thomas Bach said in a video message shown at Friday's news conference.

A final decision on the team members will be made by the IOC in June.

The Mardini sisters were among Syria's brightest swimming stars until the war interrupted their progress. The family had been moving around to avoid the fighting so their daughters could continue swimming, but the war intensified and eventually the decision was taken to leave altogether.

"Our house was destroyed. We don't have anything anymore," said Yusra Mardini, who has since been joined by the rest of her family in Berlin.

The sisters left Damascus in early August, joining a wave of Syrian refugees who had lost hope of the conflict ending soon. They made their may to Lebanon and then Turkey, where they paid smugglers to take them to Greece.

Their first attempt was thwarted when Turkish coastguards drove their boat back so they tried again, boarding a small inflatable dinghy at dusk. There were 20 people crowded onto the boat, all but three of whom couldn't swim. Within half an hour, the boat was taking on water.

All the passengers' bags were thrown overboard in an effort to stay afloat as wind churned up the Aegean Sea. But it wasn't enough. As a last resort, Yusra, Sarah and another strong swimmer jumped into the water to give the boat more buoyancy.

"This was awful. We were thinking, it would be a shame if we didn't help the people who were with us, because there were people with us who couldn't swim," Yusra Mardini said. "Of course, I hated the sea after that. It was a really tough experience."

For 3 1/2 hours they clung to the side of the small boat until it reached the Greek island of Lesbos. A weeks-long overland trek followed through Macedonia, Serbia and Hungary. They had to hide from police in cornfields to reach Hungary.

"A lot of people were caught," Mardini said.

Strangers gave them clothes, others stole from them. They were arrested at borders and lost money on expensive tickets as authorities refused to let trains full of refugees pass.

Yet their spirits remained high. Police who stopped them asked them why they were laughing.

"We said, because we were going to die in the sea, and now we got to be afraid of you?" Mardini said.

Eventually, the sisters made it to Austria and then Germany. Shortly after arriving in Berlin, an Egyptian translator at their refugee shelter put them in touch with Wasserfreunde Spandau 04, a local swimming club, where they were introduced to coach Sven Spannekrebs.

Spannekrebs said he was surprised by Yusra Mardini's remarkable progress and that she has a good shot of qualifying for the IOC's refugee team.

"For the last five months, her progress has been really, really good, better than I expected. We're on a good path, looking forward to the next weeks," Spannekrebs said.

They were initially working toward reaching the 2020 Olympics in Tokyo but such was her progress that "everything moved a little faster than we thought. Now, if it happens it happens," Spannekrebs said. "A lot of athletes can take her as an example. She's really focused in training, mostly."

Her daily schedule involves school, training, more school and more training. She is determined to make the most of her opportunity, especially after what she's been through in the last few months.

"It's quite hard to leave your homeland. It's not only me experiencing this, but a lot of people from my country, thousands, so that makes it easier. We're supporting each other," said Mardini, whose greatest hope of qualifying is in the 200-meter freestyle. "It's the chance of a lifetime, a really nice chance and I think I have to work hard for that."

If she makes it to Rio, she looks forward to meeting her old Syrian teammates and friends.

"We were talking about it and it was like, 'Yeah I'll see you again," Yusra said. "All the athletes want to get to the Olympics. It doesn't matter if it's a Syrian or Olympic flag. I think I'm just going to be an athlete girl."