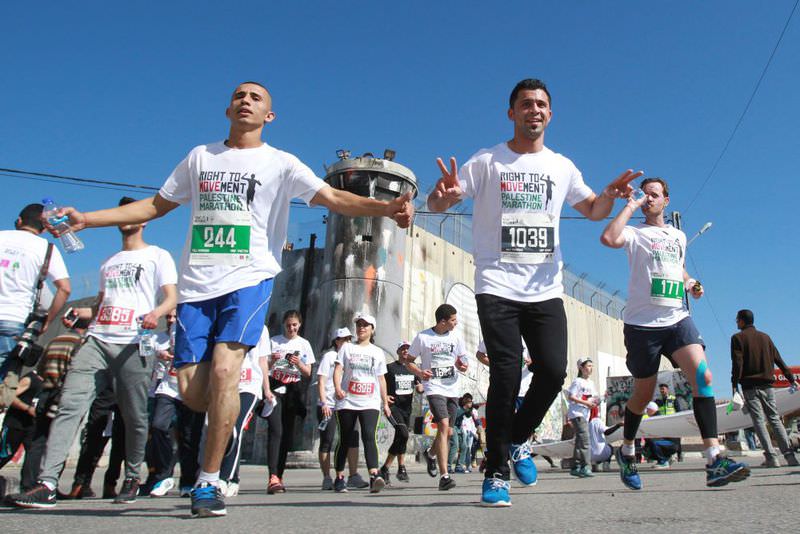 Thousands of Palestinians and international athletes dashed across the streets of the ancient city of Bethlehem on Friday in the fourth annual Palestine Marathon, a sporting event raising awareness of Israel's restrictions on Palestinians' free movement Israel barred 100 people from joining the race

Streets of Bethlehem in the West Bank hosted more than 4,000 runners, mostly Palestinians along with international athletes, on Friday. The fourth annual Palestine Marathon organized by a group of nongovernmental organizations under the theme "Right to Movement" aims to raise the public's voice against Israel, which imposes restrictions on Palestinians' freedom of movement at every turn.

Israel has denied entry for more than 100 Palestinian runners from the Gaza Strip, which remains under a heavy Israeli blockade. Palestinian Olympian Nader al-Masri was among athletes denied entry to Bethlehem for the marathon while Israeli officials linked the ban on administrative errors on the organizers, claiming applications were sent in too short notice, news agencies reported. George Zeidan, one of the organizers of the "Right to Movement" marathon, told Agence France-Presse (AFP) an initial list of 750 names was rejected. When a shorter one was sent, it was then refused for being too late, he added.

The Gisha nongovernmental organization, which campaigns for freedom of movement for Palestinians, said civilians had been caught in an administrative dispute. "We are disappointed, if not surprised, to hear that civilians in Gaza are again paying the price for the apparent negligence and disregard of both Israeli and Palestinian officials," a statement said.

Gaza and the West Bank, both considered parts of a future Palestinian state, do not share a border and anyone wishing to travel between the two must traverse Israel.

Still, thousands of runners, from hijab-wearing women to a young man running with his dog and a boy in wheelchair, managed to participate in the marathon, which started in front of the historic Church of the Nativity and ran parallel to a concrete wall erected by Israel to divide the city to the dismay of the Palestinians. Runners passed through the Aida and Dheisheh refugee camps and ran along the tall wall manned by Israeli guard posts. The marathon was forced to loop around a seven-mile stretch as a full run was impossible due to restrictions.

South African athlete Martin Stankamp was the winner of the 42-kilometer-long marathon. In a speech at the award ceremony, Stankamp said he felt the troubles Palestinian people faced because of the "Wall of Shame" and security checkpoints across the West Bank. Stankamp ran for a charity that will build a cancer hospital for children in the Gaza Strip. The winner pledged to continue its support for oppressed Palestinians.

Itidal Abdelghani, one of the organizers, told Anadolu Agency (AA) that they hosted 1,100 foreign athletes and nearly half of foreign participants were women. Abdelghani said the marathon presented them an opportunity to bring the separation wall "that complicates daily life of Palestinians" to the world's attention.

Organizers of the event say the event aims to draw attention to freedom of movement, a basic human right. The marathon's website said restrictions on movement is one of the major challenges for the Palestinian people living under occupation, as they cannot move freely in their own cities due to frequent checkpoints by Israeli troops and mandatory permits they have to acquire to travel from one city to another.

Israel has been heavily criticized for the restrictions it places on Palestinian athletes who occasionally fail to compete in events abroad. Last year, FIFA was about to vote on expelling Israel from the international football body before Tel Aviv promised to ease restrictions on entry and exit permits for Palestinian footballers and imports of sporting equipment.
RELATED TOPICS