Turkmenistan, one of the most dynamically developing nations in Asia, is set to host the fifth Asian Indoor and Martial Art Games, as the country acquires the status of a sports state, where the health and lifestyle has become a priority of the state politics.

Turkmenistan, which celebrates the 20th anniversary of its 'Neutrality', offers all the necessary conditions for development, first and foremost, for a life in peace and harmony. In view of this fact, it carries a great importance to create all the necessary conditions for holding major sports events, among which Asian Indoor and Martial Art Games play a significant role. The Games contribute, not only to increasing of international sports prestige of Turkmenistan, but also to further training of highly qualified sportsmen and popularization of different kinds of sport in our country.

The bilateral agreement about hosting the fifth Asian Indoor and Martial Art Games in Ashgabat in 2017 was signed between Olympic Committee of Asia and National Olympic Committee of Turkmenistan and also the city administration of Ashgabat on the 19th of December 2010. The news, that Turkmenistan was the first city in Central Asian region to get the right to host 2017 Asian Indoor and Martial Art Games, became a significant event in the life of Turkmenistan. 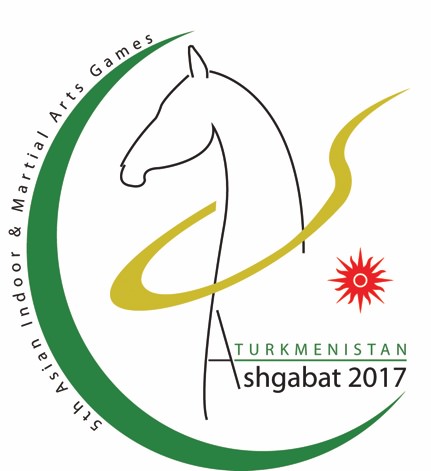 The 5th Asian Indoor and Martial Art Games will be held in the white-marbled city of Ashgabat, "the pearl of Asia", in 2017. For the first time, a great number of guests from 62 countries, including 45 Asian and 17 Pacific countries, will be received. For comparison 42 countries for 9 kinds of sport took part in the games in Incheon in 2013. We also expect 5 thousand athletes from 21 kinds of sport, 2,500 coaches, more than 10,000 foreign guests, more than 1,500 technical staff members and over 10,000 volunteers. Approximately 150,000-200,000 sport fans are expected to arrive in Ashgabat in September 2017. Opening and closing ceremonies of the Games will be held at the open air stadium with the capacity of 45,000 spectators. For the sake of transportation convenience on the vast territory, a monorail way will connect Olympic Village for 12 thousand "residents" with other venues of Olympic Park.

The sports venues are being built in our Olympic Park with the square of 156 hectares. The park includes over 30 multi-purpose venues, Paralympic Complex and Medical Rehabilitation Center. The sports venues in the Olympic Park will be provided with high quality sports equipment manufactured by leading world companies, also the peculiarities of venue decorations will be taken into account. Moreover all sportsmen and participants will be provided with all the necessities. Major competitions change image of cities, force their development, thus Ashgabat truly has a bright future.

Executive Committee of the 5th Asian Indoor and Martial Art Games is implementing complex projects on Games preparation, temporal character of which demands high-level organizational activities and effective cooperation with various institutions, organizations and companies. Turkmenistan is also working with its closest partners, which are Olympic Council of Asia, National Olympic Committees of different countries, and Sports Federations during the Games preparations.

On the 3-5 April 2014 the International Exhibition "Ashgabat - the capital of Asiada 2017" was held in the Exhibition Palace of Ashgabat City. Over 60 world sports companies participated in the event. At the beginning of the exhibition sports equipment, sports requisites and sports clothing were presented. Companies from Russia, Great Britain, Germany, France, Holland, Italy, Austria, Spain and many others presented their services. Some of the participating companies took steps to establish mutually beneficial connections with Turkmenistan.

On the 8-10 April 2014 the opening ceremony of Masterclass "Asiada Cuisine 2017" took place in the National tourist zone "Awaza". Experienced cookery experts from over 20 countries - Great Britain, Germany, China, Korea, Malaysia, India, Nepal, Japan, Pakistan, Azerbaijan, Georgia, Armenia, Belarus, Kazakhstan, Kirgizia, Uzbekistan, Tajikistan, the Ukraine and others - arrived to Turkmenistan to participate in this event. The forum participants were introduced to the peculiarities of the national traditional cuisine of Turkmenistan. As it was pointed, agriculture and animal farming have developed since ancient times and the products of these sectors contributed to the development of the local cuisine. Currently, Turkmen culinary art has a great potential for further development. Foreign delegation representatives pointed the significance of this event. It allows not only to represent culinary peculiarities of Asian and other countries, but also important for strengthening of relations between different countries.

In a period of time between the 30th April and 3rd of May the 54th International Conference of the Sports Group of the Asia-Pacific Broadcasting Union took place in Ashgabat. During the conference, the foreign delegates were informed about the process of preparations for Asian Indoor and Martial Art Games and discussed issues relating broadcasting of sports competitions in different parts of the world during AIMAG 2017.

On May 27, 2014 the President of Turkmenistan Honorable Gurbanguly Berdimuhamedov held a meeting with AIMAG 2017 Organizing Committee. With the purpose of thorough preparation for the Games, the President appointed the staff of the Organizing Committee and gave a permission to sign an agreement with the British company "CSM Sport & Entertainment LLP trading as CSM Strategies" on the AIMAG general plan development.

Belt Wrestling World Championship that took place in Ashgabat at the end of November 2014 was participated by 250 sportsmen from 25 countries, including Russia, Korea, India, Azerbaijan, Kazakhstan, Kirgizstan, Uzbekistan, Tajikistan, Georgia, and Pakistan. In Turkmenistan, belt wrestling is considered to be not only a kind of sport, but also a tradition, a historical and cultural heritage. As of today, belt wrestling is one of the most dynamically developing sports branch, it is currently recognized in 70 countries and the number is increasing.

The next important event was the signing ceremony of the Memorandum of participating of 17 Pacific Countries in the Games between the Organizing Committee of the fifth Asian Indoor and Martial Art Games, Olympic Council of Asia and National Olympic Committees of the Pacific Countries on November 28, 2014. 19 sports branches are included into the 2017 Games. In his speech at the signing ceremony, the President of Turkmenistan Honorable Gurbanguly Berdimuhamedov suggested to include two new sports - hurdle racing and Turkmen national "goresh" wrestling.

During the event mentioned above, also Sports Media Forum was held, where the representatives of international mass media organizations, accredited in Turkmenistan, participated.

In April 2015, the International conference titled "Asiada 2017 and the Role of Turkmenistan in Development of Sport for Progress and Peace", was held in Ashgabat. Within this conference international and Turkmen Sports specialists, media experts, the representatives of field-specific departments, sport clubs and some international press agencies participated in the international Sports Media Forum. The guests attended the event were delegates from both Asian and European countries, the United Arab Emirates, China, Korea, Japan, Malaysia, Philippines, Qatar, Iran, Iraq, Turkey, Russia, Kazakhstan, and Uzbekistan. Ashgabat - 2017 is considered to be an excellent opportunity to show the world the progress of Turkmenistan, achieved under the leadership of President of Turkmenistan Honorable Gurbanguly Berdimuhamedov in sports and economy, cultural and humanitarian area and other parts of political and social life. Strict requirements will be specified to the organization of sports competitions and providing conditions for effective work of mass media.

Currently the main goal of Turkmenistan is to host innovative Asian Games. These Games carries great importance for Turkmenistan, which will contribute to increasing of international prestige of Turkmenistan; it is an important step to the integration into the international sports movement. The Games will be helpful for establishing of the atmosphere of trust and sympathy in the region and the world, and also will stimulate the national economy, cultural life and tourism industry.

Another major event of this year was the 43th meeting of Olympic Council of Asia General Assembly, which took place on September 15 and 16. The delegates of National Olympic Committees of Asian and Pacific Region Countries, heads of IOC and OCA took part in the meeting, which was held in the Olympic Park. Also within this forum the Executive and Finance Committee of OCA held some meetings. At the beginning of the meeting two new hotels in the Olympic Park celebrated its grand opening. The head of the country expressed his confidence, that this important event, which took place in Turkmenistan for the first time, plays a significant role in sports development in the whole Asian region, offers a wonderful opportunity to get acquainted with Turkmenistan and its progress in sports.

Much work for preparations of the most major event in Turkmenistan has been done by the 5th Asian Indoor and Martial Art Games Organizing Committee, including signing agreements with leading international companies, inviting famous coaches were for training our sportsmen.

In March 2015 the Executive Committee, the Union of Entrepreneurs and Industrialists of Turkmenistan and the Central Council of Makhtumkuli Youth Organization announced a competition for creating a motto of Asian Indoor and Martial Art Games 2017. This motto should become a reflection of inner feelings of Turkmen people, their peacefulness, their devotion to sport and love to their independent neutral fatherland. The motto chosen for the Games in three languages goes as: "Sagdynlyk. Ruhubelentlik. Dostluk." (tm), "Health. Inspiration. Friendship." (Eng), "Здоровье. Воодушевление. Дружба."(гиз).

In September 2015 the Executive Committee announced a bid for international countries for operational planning in all activity directions, mentioned in Asiada - 2017 Master Plan.

The 5th Asian Indoor and Martial Art Games Executive Committee was established in December 2013. Considering difficult tasks, which the Committee has to fulfill, new departments were initiated in September 2015.

For the purpose of the coverage of the Games events, an international bid to create an informational website was announced. "Asman oky" company won the bid. The company is currently working on a website platform and its data protection. The official website of the Games is planned to be open by the end of 2016.

We are planning to start test competitions at the beginning of 2016. These test events will give an opportunity to estimate the readiness of sports infrastructure and its reliability for the upcoming Games.

Volunteers are one of the most important parts of A1MAG 2017 team. They are pledge of successful Games. The main part of volunteers will consist of young students, who will take part in various activities, ranging from meeting delegates at the airport to helping in organization of opening and closing ceremonies. Currently, volunteers are being linguistically prepared and also provided training in various trainings.

Turkmenistan is acquiring the status of a sports state, where the health and lifestyle has become a priority of the state politics. Due to state programs and policy, the development of high performance sport has become a guide for each sports clubs even in the most remote cities of the country.

Thanks to the politics of President of Turkmenistan Honorable Gurbanguly Berdimuhamedov, Turkmenistan has been transformed economically and socially. Though our country has been commercialized, people stay socially secured. And in future the major aim of Turkmenistan is to host innovative Asian Games.

These Games are of great importance for Turkmenistan, which will contribute to increasing of international prestige of Turkmenistan; it is an important step to the integration into the international sports movement. The Games will be helpful for establishing of the atmosphere of trust and sympathy in the region and the world, and also will stimulate the national economy, cultural life and tourism industry.

The 5th Asian Indoor and Martial Art Games, which is the first major international sports event to be held in the country's, will bring unique knowledge, skills and experience, as it will develop patriotic feeling and engage young generations in sports.