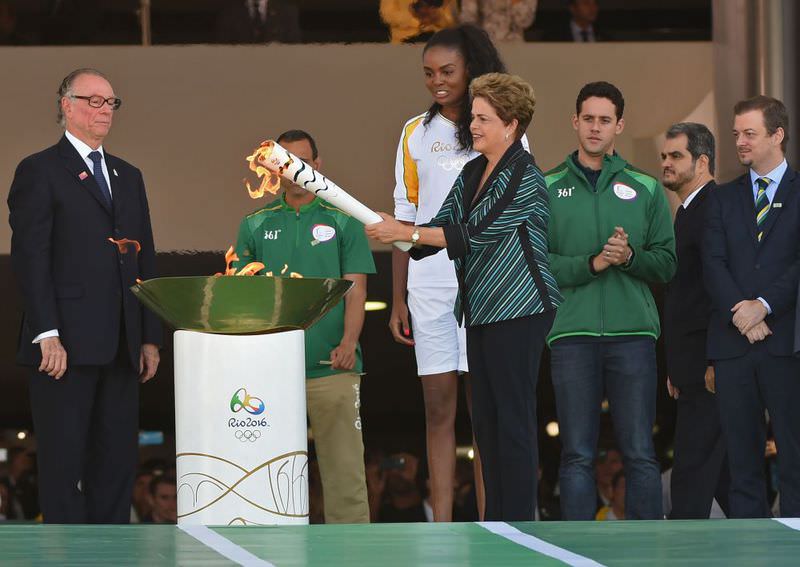 by Anadolu Agency May 05, 2016 12:00 am
President Dilma Rousseff of Brazil on Tuesday lit the torch of the Olympic Games that will take place in Rio de Janeiro later this summer.

Rousseff, who is battling in a political crisis that threatens her hold on power, acknowledged the challenges facing the country but promised unmatched success for the host nation.

"Brazil is ready to host the most successful Olympics in history" and is "ready to offer protection to the athletes, the technical staffs, heads of delegations, tourists, and journalists - to all our visitors," she said during a ceremony Tuesday at the Planalto Palace-the president's official residence.

"We know there are political difficulties in our country today, we know that there is political instability," she added.

In addition to the political crisis, Brazil is dealing with a stagnant economy and an outbreak of the Zika virus that has some athlete threatening to boycott the games.

The symbolic flame will travel to more than 300 cities before reaching the world famous Maracana Stadium for the opening ceremonies on Aug. 5.

Rosseff's speech may have been her last before her eventual departure from office that could come as early as next week. The Senate is expected to approve the beginning of a political trial against the president.

If approved, Rousseff will be forced to step down from the presidency for six months at which time Vice President Michel Temer will assume leadership of the country.

Temer, who is also under investigation, held a meeting Tuesday as part of negotiations for the formation of a new cabinet.