Will Smith, Lennox Lewis to be pallbearers at Ali's funeral 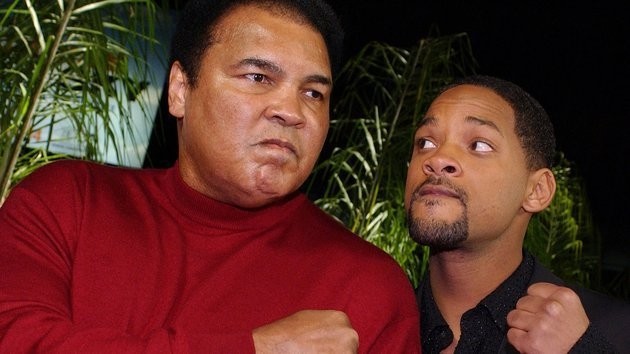 Will Smith played Ali in the 2001 biopic of the same name, earning an Oscar nomination and becoming a family friend.
by Compiled from Wire Services Jun 08, 2016 12:00 am

Smith, who played the title role in 'Ali', became close to the boxing legend after the filming and Lewis is considered one of the greatest boxers of the last 25 years, having won several world titles in the 1990s and 2000s.

Actor Will Smith and former heavyweight champion Lennox Lewis will be among the pallbearers for Muhammad Ali's funeral on Friday, joining a list of notable athletes, entertainers and politicians to mourn the boxing legend.

Turkish President Tayyip Erdoğan, former U.S. President Bill Clinton, and comedian Billy Crystal were among those previously announced as participating in public events as the world grieves the loss of the boxer, showman and antiwar activist who captivated global attention in the 1960s and 1970s. One of the transcendent figures of the 20th century, Ali died on Friday at age 74. Family spokesman Bob Gunnell announced the details of the memorial services on Monday.

Smith played Ali in the 2001 movie of the same name, earning an Oscar nomination and becoming a family friend. London-born Lewis, who went on to represent Canada in the Olympics, is one of three boxers along with Ali and Evander Holyfield to have held the heavyweight title three times. They will be joined by relatives and family friends in carrying the casket through Ali's home town of Louisville, Kentucky on Friday. More than 30,000 tickets will be distributed to the public for two memorials scheduled for Thursday and Friday in sports arenas in the city. Official events start with a private ceremony on Thursday, followed by an Islamic service for the public at Freedom Hall, the site of Ali's last professional fight in Louisville, where he defeated Willi Besmanoff on Nov. 29, 1961. The service will be led by Imam Zaid Shakir of California. On Friday, Ali's family will gather for prayers, to be followed by the funeral procession through Louisville. The route will include a boulevard bearing Ali's name on the way to the Cave Hill Cemetery. The main service will take place at the KFC Yum! Center on Friday afternoon, when Clinton and Crystal are scheduled to deliver eulogies. In addition, Fischer announced an "I Am Ali" Festival on Wednesday with programming for children.

Meanwhile, Muhammad Ali and his family never seriously thought of donating his brain for research, according to his doctor. "Not really," was Dr. Abe Lieberman's answer when he was asked on Monday if submitting the brain for research was considered. Lieberman said he didn't think boxing contributed to Ali contracting Parkinson's disease but he couldn't be "a hundred percent" certain. The doctor spoke at a news conference at the Muhammad Ali Parkinson Center at the Barrow Neurological Institute in Phoenix. Lieberman was among those who diagnosed Ali in 1984, and became a good friend as well as his physician. Ali believed he suffered serious damage in his fight with Larry Holmes in 1980, according to Lieberman.

Ali once said in an interview that if he had known "Holmes was going to whip me and damage my brain, I would not have fought him. But losing to Holmes and being sick are not important in God's world."But Lieberman said Ali probably already had Parkinson's when he climbed into the ring for the Holmes fight. The doctor said he did not hear Ali blame boxing for his illness.

"Muhammad had no regrets about boxing," Lieberman said. "He didn't really talk about it that way. Muhammad was a devout Muslim and believed that you did your best and whatever happened was God's will."

Dr. Holly Shill, director of the Ali center, said research shows that those with a history of head injury are at only a slightly greater risk of contracting Parkinson's. Ali once calculated he had taken 29,000 punches to the head. And there's no research on what so many blows might cause. Lieberman said he treated boxing great Jack Dempsey and saw a serious, quick decline in the former fighter's cognitive abilities due to brain trauma. But in Ali, Lieberman said, he saw the natural progression of Parkinson's disease.
RELATED TOPICS