15-year-old champion Ayşe Begüm Onbaşı: I'm a medal monster, I compete to go beyond myself 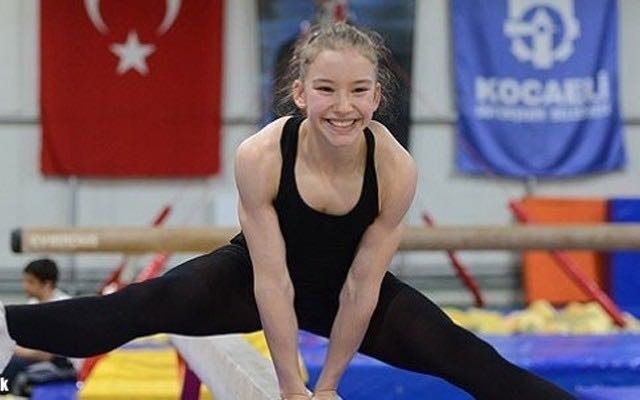 by Hakan Baş Jul 09, 2016 12:00 am
Ayşe Begüm Onbaşı, a 15-year-old world gymnastics champion, is now gaining a reputation around the world. She was part of a strong Turkish contingent and grabbed gold at the Aerobic Gymnastics World Championships.

Onbaşı took part in the 15-17 age group during the 14th World Championships in South Korea. The Turkish team managed to reach the finals in six categories. Onbaşı won gold and silver as a trio with Mehmet Ercoş and Deniz Şahin.

Ayşe Begüm Onbaşı lives with her family in Akhisar, Manisa. Her family makes their living by selling textile products. Despite her young age, Onbaşı has won more than 60 medals, 35 of which are gold. She is nicknamed the "Medal Monster," a name she has happily adopted. She competes in three categories in every competition she participates in. Onbaşı missed the gold medal in Mexico last year after she fell down during her Aerobic Gymnastics performance. This bad luck only served to increase her motivation. She both studied and trained for five hours a day. Her resolve and discipline has led to a slew of medals.

Onbaşı said, "My only rival is myself. I worked hard with devotion, resolve and discipline. Everybody calls me the medal monster. Yes I'm a medal monster and I compete to go beyond myself." She is now preparing for the ISF GYMNASIADE 2016 and the School Sports Olympics to be held in Trabzon between July 11-18. She will compete for two more years in the 15-17 age category. Next year, she will compete in the European Championships.

President Recep Tayyip Erdoğan called Onbaşı after her victory to congratulate her. He wished her every success in the future. Erdoğan said that Turkey was proud of Onbaşı's success. The president was also briefed on Onbaşı's education and training.
RELATED TOPICS