Yasemin Can clinches gold for Turkey in 5,000 meters at 2016 European Athletics Championships 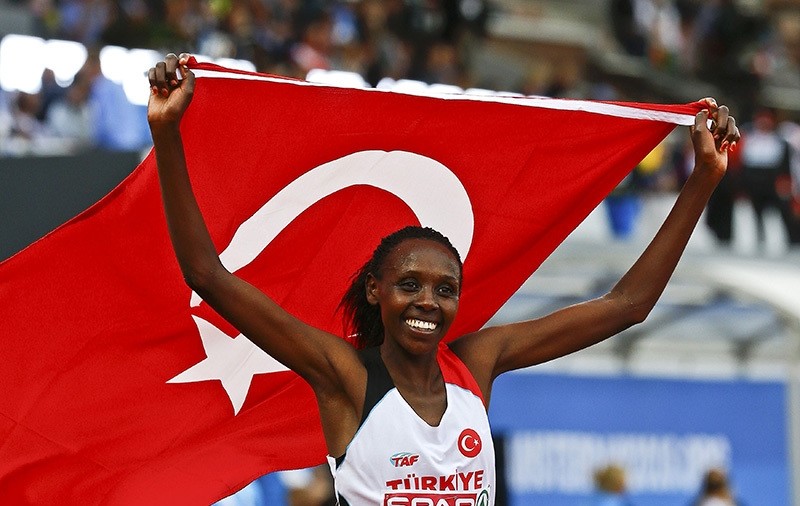 Turkey's Yasemin Can reacts after winning Women's 10,000 final at the European Athletics Championships in Amsterdam, Netherlands, July 6, 2016 (Reuters Photo)
by Daily Sabah with Agencies Jul 09, 2016 12:00 am

Kenyan-born teenager Yasemin Can clinched a long-distance double for Turkey at the 2016 European Athletics Championships on Saturday, dominating the 5,000 meters with spectacular frontrunning, much as she had done during the 10,000 three days ago.

Can was only cleared to run for Turkey in March and made the most of this with a devastating kick after two kilometers — and never letting up — to win in a slow 15 minutes, 18.15 seconds, beating defending champion Meraf Bahta of Sweden by 2.39 seconds. She had won the 10,000 in much the same style, winning gold with 31 minutes, 12.86 seconds, also breaking her personal best with 18 seconds and the under-23 European record for 10,000m which was also set by her.

Yasemin Can @AtletizmTAF does the 5000/10,000m distance double with a fine run this evening #ECH2016 #doublechamp pic.twitter.com/UbP7navYbm


Can also became the third athlete who managed to double in long distance throughout the championship history.

It was the fourth gold for Turkey at the championships, and all won by athletes who were foreign-born. Kenyan-born Can took up Turkish citizenship 15 months ago.

With Russia not competing because of a doping ban, the medal table was bound to look different. But few would have expected Turkey to do this well, which won four silver and one bronze medals in addition to gold.

The results from the European championships Women's 5,000m on Saturday: