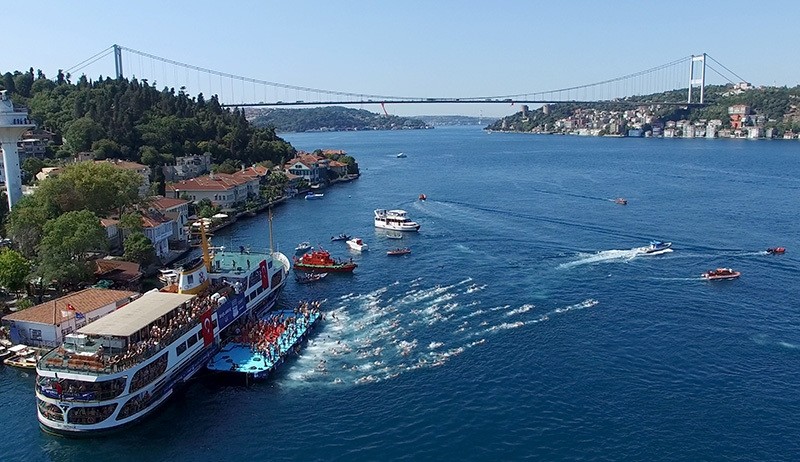 The 28th edition of the Bosporus Cross-Continental Swimming Race was held yesterday in the waterway dividing the Asian and European sides of Istanbul. More than 1,500 swimmers joined the race to reach the European side in a course of 6.5 kilometers.

Organized by Turkish Olympic Committee (TMOK) and sponsored by electronics giant Samsung, the race started from Kanlıca neighborhood on Istanbul's Asian side and ended in Kuruçeşme neighborhood on the European side.

Swimmers from 49 countries participated in the race, which was a little bit lower than last year's turnout.

Turkish swimmers Ömer Tara and Nilay Erkal won the race in the men's and women's category respectively, while Bulgarian swimmer Dimitar Videnov was the only foreigner to reach the top three by securing the second spot in the men's category.

The race was launched by Youth and Sports Minister Akif Çağatay Kılıç, while a large crowd and media crews from all around the world gathered on the shore to watch and cover the race. Minister Kılıç said at the launch that it was important 800 of the competitors were foreigners. "They see there is nothing extraordinary in Turkey after (the coup attempt) of the last week and no sports event has been cancelled," he said.

Kılıç said France has gone ahead with Euro 2016. "We don't have any changes in any planned sports events," Kılıç underlined.

The Samsung Bosporus Cross-continental Swimming Race is organized under the auspices of the International Olympic Committee with large social and corporate support. Thanks to increasing yearly interest, this adventure, which began with the participation of four female and 64 male athletes in 1989, has grown to become an important part of the Turkish sports tradition.

Here are the top three results in men's and women's categories: