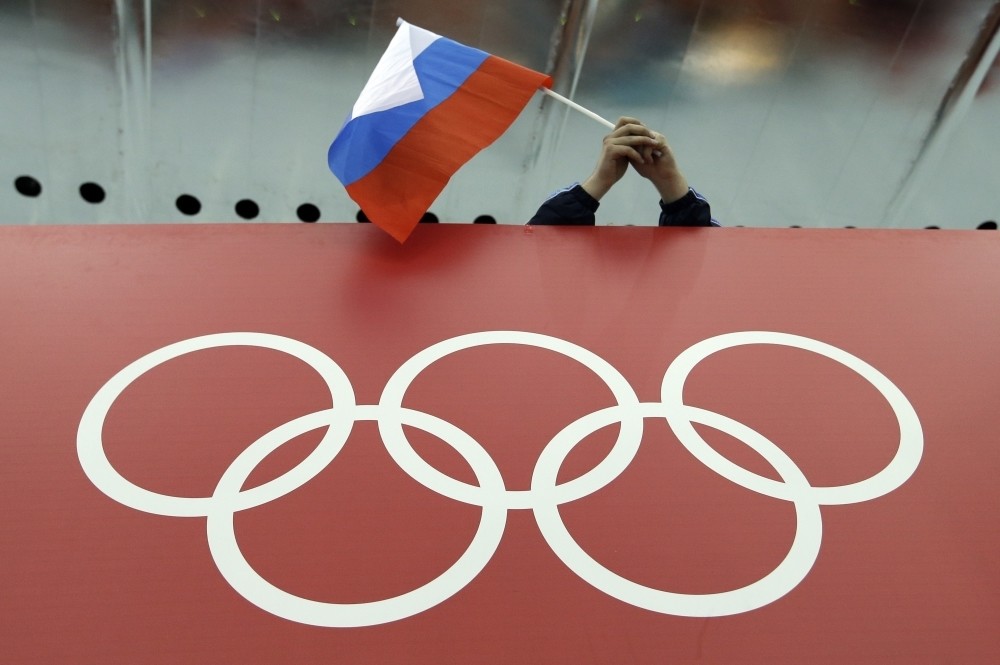 A Russian skating fan holds the countryu2019s national flag over the Olympic rings before the start of the menu2019s 10,000-meter speedskating race during the 2014 Winter Olympics in Sochi, Russia.
by Daily Sabah with AFP Jul 26, 2016 12:00 am

The International Olympic Committee's decision not to ban Russia from the Rio Games over state-run doping left international sports leaders divided yesterday, less than two weeks before the opening ceremony. Seeking to justify Sunday's decision, IOC President Thomas Bach said an outright ban would trample the rights of clean Russian athletes who are hoping to compete at the upcoming Games.

Individual sports federations will have primary responsibility for determining every Russian athlete's eligibility for Rio, the IOC executive said. The World Anti-Doping Agency last week called for Russia to be banned after detailing how Russia's sports ministry had directed a massive cheating program with help from the FSB state intelligence agency.

United States anti-doping chief Travis Tygart - one of many who urged a total ban against Russia, accused the IOC of creating "a confusing mess" with its decision. "In response to the most important moment for clean athletes and the integrity of the Olympic Games, the IOC has refused to take decisive leadership," the USADA boss said in a statement.Drug Free Sport New Zealand chief executive Graeme Steel also criticized the IOC's decision to "pass the hot potato to international federations". "The fight against doping in sport requires strong international leadership, none more so in this case, where the integrity of an entire Olympic and Paralympic Games is at stake," added Australian Sports Minister Sussan Ley. WADA officials said they were "disappointed" with the IOC's decision, which director general Olivier Niggli said would "inevitably lead to a lack of harmonization, potential challenges and lesser protection for clean athletes". The cheating affected 30 sports, including at the 2014 Sochi Winter Olympics and other major events, WADA said, in revelations that widened the worst drug scandal in Olympic history. Russia's entire track and field squad has already been barred from Rio following a similar WADA report on "state-supported" doping in that sport.

Fourteen national anti-doping agencies, including the U.S., Germany and Japan, as well as several national Olympic committees had demanded Russia's exclusion from Rio.

But others, including the global governing body for swimming FINA, opposed a blanket ban, as did countries such as Italy and others closer to Russia. Pat Hickey, president of the European Olympic Committees, said the group "completely supports" the IOC decision which will "enable the participation of clean Russian athletes at the Rio 2016 Olympic Games, just days away." The Association of National Olympic Committees also backed the IOC, with ANOC president Sheikh Ahmad Al-Fahad Al-Sabah saying an all-out ban "would have unfairly punished many clean athlete." "ANOC commends the IOC for favoring individual justice over collective responsibility and giving international federations responsibility to ensure clean competitions in their sports at Rio 2016," he said.

Bach said the IOC decision considered the severity of the misconduct while also sending "a message of encouragement to clean Russian athletes." "This result is one which is respecting the rules of justice and all the clean athletes all over the world," he said. Russian sports minister Vitaly Mutko, a key player in the WADA report who has been banned from Rio, hailed the IOC's "objective" decision.

Separately, an IOC ethics commission ruled that 800m runner Yuliya Stepanova, who turned whistleblower on doping in Russian athletics, could not go to Rio even as a neutral - a decision that both WADA and USADA denounced as likely to discourage others from coming forward. The IOC executive implemented what Bach termed a rigorous set of criteria for each Russian Olympic hopeful.

First, athletes must be individually cleared by their respective sports federation and there should be no presumption of innocence. An expert from the Court of Arbitration for Sport must also approve each individual decision. Additionally, any athlete who has previously tested positive for doping is ineligible, even if they have already served their suspension.

Finally, no athletes named in the WADA report put together by Canadian law professor Richard McLaren are eligible. But the complex screening process must be carried out for the 387 athletes nominated for Rio by the Russian Olympic Committee (ROC) before the Games start on Aug. 5. "This is a very ambitious timeline, but we had no choice," Bach said.

Russians "have to clear the highest hurdles in order to have chance to compete in the Olympic Games," he added. Immediately following the IOC announcement, the International Tennis Federation said eight players already met the eligibility requirements. Mutko told the R-Sport news agency he was "absolutely sure that the majority of the Russian team will meet the criteria."
Last Update: Jul 26, 2016 1:01 am
RELATED TOPICS