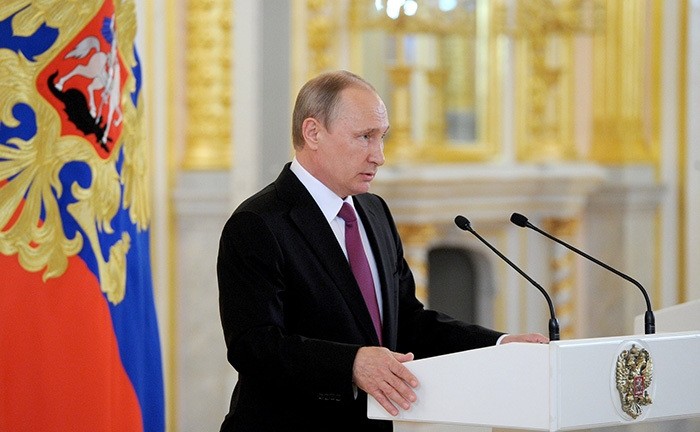 Russian President Vladimir Putin said yesterday the absence of top Russian competitors will "markedly lower" at next month's Rio Games, as he met competitors set for Brazil and those barred over state-run doping.

Over 100 Russians have so far been banned from the Games, including track and field stars Yelena Isinbayeva and Sergey Shubenkov, who were among those meeting Putin at the Kremlin.

"It's obvious that the absence of Russian competitors, leaders in many disciplines, markedly lowers, and will lower the intensity of the fight and that means the spectacle at the upcoming events," Putin said in a speech.

"The other sportsmen understand that the quality of their medals will be different."

Putin blasted a decision to exclude the Russian track and field team and some other athletes as political and said it goes both "beyond the legal sphere and common sense."

A tearful Isinbayeva lashed out at the suspension by the athletics' governing body, the IAAF, and thanked Putin for his support.

"They banned us without evidence, crudely and rudely," she said, before the team headed to a religious ceremony to be blessed by the influential head of the Russian Orthodox Church.

The International Olympic Committee (IOC) sparked fierce criticism on Sunday when it resisted a blanket ban in favor of allowing individual sports federations to make the call on which Russians can go to Rio.

International sports federations are now scrambling to vet Russian athletes as time ticks down to the start of the Games on Aug. 5.

Russian competitors are set to jet out to Brazil early Thursday but it still remains unclear how many of the 387-strong squad named last week will eventually compete.

Rowing's international governing body FISA was the latest to get tough with Russia, announcing that 22 of 28 Russian competitors had been banned under strict criteria imposed by the IOC.

That took the number of Russian competitors banned since Sunday to 41, in addition to 67 members of the track and field team excluded by the IAAF.

The IAAF on Wednesday reaffirmed that only one Russian athlete, U.S.-based long jumper Darya Klishina, was eligible to compete because she lives and trains outside the Russian system.

In other sports there was some good news for Moscow as the world governing body for fencing said all 16 Russians down to compete had been cleared.

The head of Russia's trampolining federation, Nikolai Makarov, told TASS news agency that he had received "verbal permission" from the sport's international authorities for the team to take part.

The latest doping scandal to rock Olympic and Russian sport was triggered this month by Canadian law professor Richard McLaren for the World Anti-Doping Agency (WADA), whose report detailed an elaborate doping system directed by the Moscow sports ministry and used in more than 30 sports over four years.

Controversially, among the Russians banned is Yuliya Stepanova, the 800m runner who lifted the lid on systematic doping and corruption in Russian athletics.

Stepanova, who fled Russia and is reviled by many back home, is now making a last-gasp appeal against her IOC ban.

Her inclusion is backed by the IAAF and many anti-doping officials who have praised her whistleblowing efforts, but was nixed by an IOC ethics commission.

Four-time world breaststroke champion Yulia Efimova also plans to appeal her ban at the Court of Arbitration for Sport.

The IOC has received praise from Moscow but stinging criticism from elsewhere for failing to impose a total ban on Russia over shocking evidence of a state-organized system to cheat its way to glory in Olympic and world sport.

Bach fired back that the decision to leave individual sports federations to decide which Russians could compete "respects the right of every clean athlete around the world," noting that would-be Russian Olympians must clear "the highest hurdles" to make the Games.
Last Update: Jul 27, 2016 5:44 pm
RELATED TOPICS