All eyes on Bolt in sprinter’s last Olympics 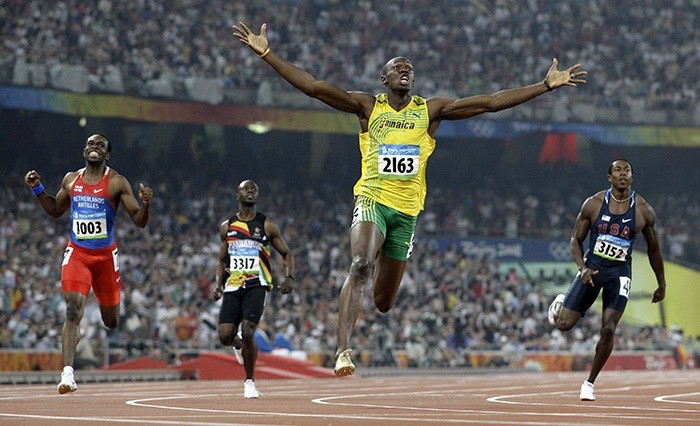 n this Aug. 20, 2008 file photo, Jamaica's Usain Bolt crosses the finish line to win the gold in the men's 200-meter final during the athletics competitions in the National Stadium at the Beijing 2008 Olympics in Beijing. (AP Photo)
by Anadolu Agency Jul 28, 2016 12:00 am

With the fastest man on Earth set to soon retire, attention will be fixed on Usain Bolt as he competes in his final summer Olympics.

Bolt won three gold medals in 2008's Beijing Olympics and matched the feat four years later in London. In doing so he became the first Olympian to net consecutive Olympic gold medals in the 100- and 200-meter races.

Full of his signature bravado, Bolt declared, "the sport needs me to win and come out on top."

"I'm not going to lose one of the golds, for sure," he said.

Whether or not the Jamaican runner matches his performance again this year in Rio, Bolt will still claim the mantle of the most decorated sprinter in Olympic history.

And as he prepares to retire after the 2017 world championships, there is a host of young talent waiting in the wings for their chance to eclipse his records.

Among them is Trayvon Bromell. The 21- year old American came in second at trials with 9.84 seconds - only just behind established star Justin Gatlin's best 9.80 seconds.

Gatlin and Bolt, who are strong contenders in the 100, 200 and 4x100 meter relays have recently engaged in a war of words ahead of the games, with Gatlin deriding Bolt for receiving a medical exemption for trials.

"At the end of the day when you command a certain power in track and field sometimes you can exercise it," Gatlin, who has been one of Bolt's most frequent competitors, said, according to Agence France Presse.

Middle-distance runner David Rudisha will also be hoping to take gold back to his native Kenya after barely qualifying for the games. Rudisha set a world record in London, securing a gold in the 800-meter race, but finished second in trials this year behind Alfred Kipketer and Ferguson Rotich.

Double Olympic champion Mo Farah is returning to the 5,000- and 10,000-meter races, which he dominated in London for Great Britain.

For women sprinters, American English Gardner will be hoping to make her mark in the 100 and 4x100 meters.

And Bolt's countrywoman, Shelly-Ann Fraser-Pryce will be seeking to earn her third gold medal in Rio in the 100 meters.

Ethiopia's Genzebe Dibaba, who is the cousin of Olympic champion Derartu Tulu, is going to Rio in the hope of attaining her first Olympic medal after securing a gold and bronze at the Beijing world championships last year.

And coming off a torn hamstring in 2013, American Allyson Felix is hoping to maintain her dominance in the 200 meters.

Of note, regular Olympic contender Russia will be absent from competition after its team was banned following a damning report by the World Anti-Doping Agency that alleged widespread state-sponsored doping.

Track and field is the only event for which Russia received a full ban but the team has received a partial ban in five sports and is awaiting a decision in 10 others, including gymnastics, boxing, wrestling and weightlifting.