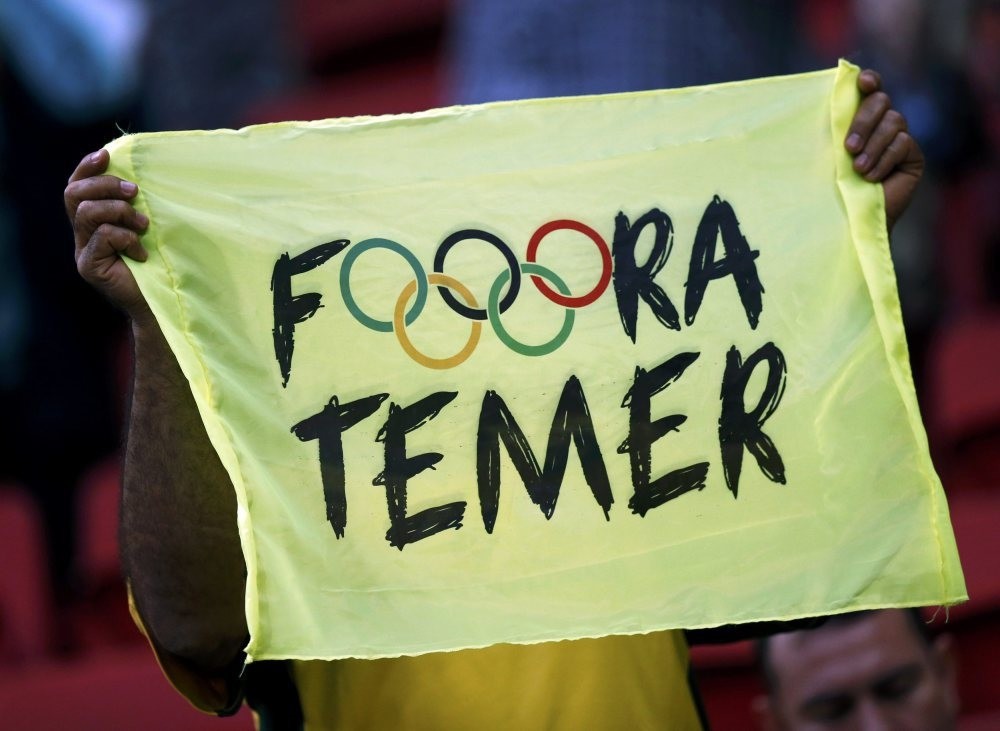 A banner reads ,Out Temer, in reference to the interim Brazilian President Michel Temer.
by Daily Sabah Aug 06, 2016 12:00 am

The start of the 2016 Olympics in Rio has been over shadowed by demonstrations, violent crime, infrastructure failure and poverty. Turkey's 100 athletes from 28 fields will compete in the games but they face poor conditions in the Olympic village

Millions of television viewers around the world watched the three-hour opening ceremony in Rio de Janeiro on Friday night, which came as the country reels from political and economic turmoil. The event could not avoid the issues that are gripping Brazil - a president facing impeachment, a deep recession and environmental threats. Unpopular interim Brazilian President Michel Temer attended the opening ceremony. He will be replacing his ally-turned-enemy, suspended President Dilma Rousseff.

Fewer heads of state participated because of Brazil's current political crisis. Rousseff's impeachment trial is expected to end after the Olympics ends on Aug. 21, which leaves the country with two presidents until then.

The start of the Olympics in Rio has been shadowed by a storm of bad news - not including a Zika outbreak that prompted 150 health officials to recommend moving the games out of the city as a public safety measure. Demonstrations, violent crime, infrastructure failures and poverty are set to greet spectators this weekend in an event that some economists say could mean upward of $15 billion in losses for Brazil.

Under these circumstances, Turkey is looking to help the public forget Turkey's failure in the 2012 London Olympics, where the country won just two gold medals, and aim to surpass the achievements of the 1960 Rome Games where the Olympics team garnered seven gold medals, the most in the country's Olympic history. The high number of sports figures who have qualified for the Olympics and the majority of young athletes among the competitors have instilled hope for Olympic glory. Turkey competed in only 16 fields in the London games and it will compete in 28 fields in Rio. The country's athletes will also compete for the first time in tennis, modern pentathlon, canoeing and rowing in the 2016 Olympics.

However, the Turkish women's national basketball team is suffering problems with accommodation in Rio. The building they are staying in has infrastructural problems such as the gas system and sewage. Since the food is bad, female Turkish athletes say they have had to have food brought in from outside.

Tutya Yılmaz and Mete Gazo are the two youngest Turkish Olympians. The 17-year-olds will compete in gymnastics and archery.

Ferhat Arıcan, 23, will be the first Turkish male gymnast to compete in the Olympics. Gymnastics is not a category Turkey has ever mastered and Göksu Uçtaş became the first Turkish gymnast in Olympic history when she competed in London in 2012.

The modern pentathlon is also new to Turkey, which will compete in the category for the first time in its Olympics history. İlke Özyüksel, 19, earned the title of the first Turkish athlete to compete in this category.

Viktoria Zeynep Güneş, a young swimmer hailing from Ukraine, is among Turkey's favorites to win Olympic gold. Güneş won the first female gold swimming medal to Turkey in swimming when she represented the country in the 2015 International Swimming Federation (FINA) World Championship.

Servet Tazegül made the headlines in the 2012 Olympics when he became the first Turkish athlete to win gold in taekwondo. The country is counting on Tazegül for a gold medal at the Olympics. Wrestling, called the "sport of ancestors" in Turkey, has always been one of the few fields where Turkey has achieved success. Rıza Kayaalp, a world and European champion might reach for gold in Rio.

Taha Akgül is another wrestler Turkey is counting on as he won three European titles and one world title over the last four years. Akgül plans to retire if he wins gold in Rio and switch to oil wrestling.

In tennis, Çağla Büyükakçay, the first Turkish woman to win a WTA title, is the country's favorite for a gold or at least a bronze medal. Büyükakçay will be the Turkish team's flag bearer in the Olympics according to Turkish media though it is not confirmed yet. Büyükakçay will play against Russian rival Ekaterina Makarova.

The 2016 Summer Olympics in Rio de Janeiro will be televised by TRT. Hours before the Olympics TRT bought the rights to broadcast the games. As with previous years, Olympic Broadcasting Services will produce the world feed provided to local broadcasters for use in their coverage.