Rio proving to be a disappointment for Turkish athletes 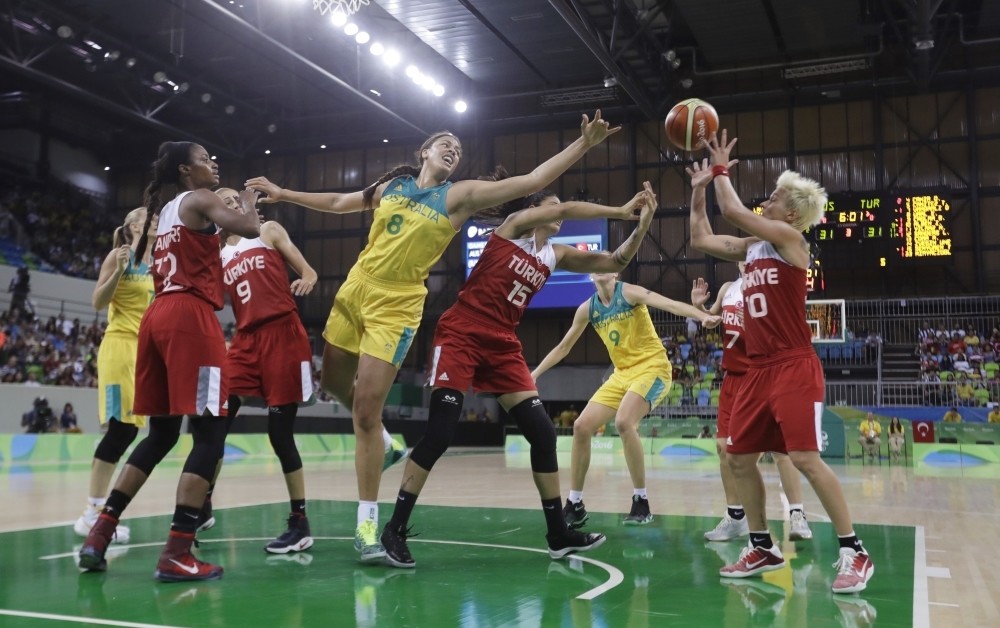 Australia center Liz Cambage (8), Turkey forward Tilbe u015eenyu00fcrek (15) and Iu015fu0131l Alben reach for the rebound during the second half of a women's basketball game at the Youth Center at the 2016 Summer Olympics in Rio de Janeiro.
by Daily Sabah with Wires Aug 09, 2016 12:00 am

After three days of the Rio Olympics, Turkey has still not won a medal. The Turkish female basketball team lost their second game against Australia, while Viktoria Zeynep Güneş advanced in the semi-finals in the swimming but lost in the final

Turkey has not found the success it expected as of the third day of the Rio Olympics. Australia struggled to shoot from outside and the Aussies held off Turkey 61-56 Sunday night in the Olympic women's basketball group play. The 6-foot-8-inch Liz Cambage outscored Turkey 7-2 to open the third quarter, putting Australia (2-0) ahead to stay even with Penny Taylor and Erin Phillips going a combined one of 12 from the floor. Cambage finished with 22 points and 11 rebounds.

Turkey (0-2) made Australia work to get the ball inside early by playing a zone defense, and the Aussies settled for jumpers and 3-pointers that they couldn't knock down. Phillips missed all five shots she took, and the Aussies were 6 of 24 outside the arc. Lara Sanders, who U.S. college basketball fans may remember as LaToya Pringle at North Carolina, scored 25 points. Nevriye Yılmaz added 14 points and Işıl Alben had 13 and with Sanders' production the trio outscored Australia 29-25 in the first half.

Turkish tennis player Çağla Büyükakçay was eliminated by her Russian rival Ekaterina Makarova 2-1 and said farewell to Rio. In the artistic gymnastics, Tutya Yılmaz ranked 42nd in the general ranking and could not advance to the finals.

Elsewhere in Rio, Novak Djokovic shook his head and placed his palm over welling eyes on his way to the locker room after a first-round Olympic exit, devastated he might never realize his goal of adding a gold in singles to a substantial collection of Grand Slam titles.

"I mean, no doubt, it's one of the toughest losses in my life, in my career," Djokovic said later, shaking his head and speaking in subdued tones. "Not easy to handle."

The Serb was hardly alone in his disappointment on Day 2 of the Rio de Janeiro Games: He was one of three No. 1 seeds to exit the tennis competition in a wild span of 12 hours.

Sajedeh Norouzi jumped to her feet, both arms reached high into the air, beaming as she waved a small Iranian flag from side to side. Again and again. She waved at every chance. She waved for every woman back home who couldn't be there alongside her at Maracanazinho arena cheering for the men's volleyball team in its Olympic debut - her first time in a sports stadium because in Iran women aren't allowed to attend all-male sports events.

The 27-year-old Norouzi, wearing a beautiful navy blue headscarf decorated with flowers of pink, yellow, orange and turquoise, insists she represented all of the other Iranian women Sunday night who are fighting to one day cheer their teams from the stands and not the TV. She had a purpose, and a passion, that she could release at long last sitting beside men who have been able to attend the games all along.

Disappointed yet again, the Brazilian fans jeered their own team and saved their applause for Iraq. Brazil, which has never won the Olympic gold medal in men's soccer, failed to win for the second consecutive game, held to a 0-0 draw by Iraq on Sunday.

Canada's Penny Oleksiak has produced both her and her country's second medal of the Rio Games in as many days.

The U.S. women's eight has entered the Rio Olympics rowing competition in dominating style, winning its heat several boat lengths ahead of the Netherlands.

Going second in the 4x100-meter freestyle relay, Michael Phelps produced the fastest split of his career and put the Americans out front for good against a powerhouse field that included defending champion France, Australia and Russia.
RELATED TOPICS