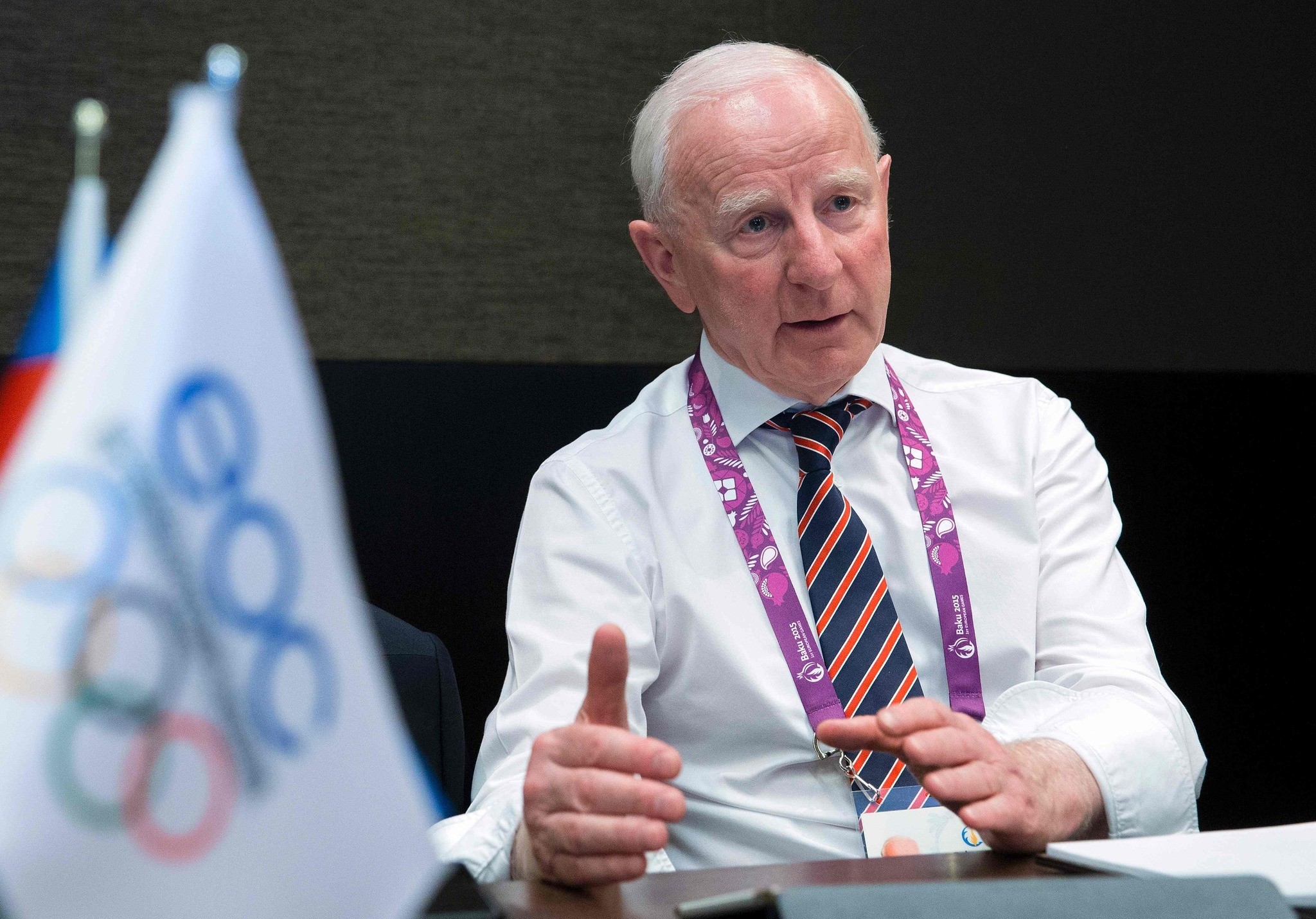 This file photo taken on June 24, 2015 shows President of the European Olympic Committees (EOC) Patrick Hickey of Ireland speaking during an interview at the 2015 European Games in Baku. (AFP Photo)
by Compiled from Wire Services Aug 17, 2016 12:00 am

Europe's top Olympic official, Ireland's Pat Hickey, on Wednesday temporarily stepped down from his position as executive board member on the International Olympic Committee, after his arrest in connection with a probe into ticket touting at the Rio Games.

"In light of this morning's developments and his ill health, Mr Hickey has taken the decision to step aside temporarily as President of the OCI (Olympic Council of Ireland) and all other Olympic functions (IOC member in Ireland, European Olympic Committee President, Association of National Olympic Committees Vice President) until this matter is fully resolved," the OCI said in a brief statement.

The police said they had discovered evidence linking 71-year-old Irishman Pat Hickey to an international scheme to illegally pass Olympic tickets to touts who were reselling them at well above their original price.

Hickey was detained at the hotel Windsor Marapendi near the Olympic Park and taken to a nearby hospital after his arrest. An online video, credited to ESPN, showed Hickey being apprehended and led away in a white bathrobe.

The Olympic Council of Ireland said Hickey, its president, was stepping aside from all his Olympic functions until the matter was fully resolved. Hickey did not respond to calls for comment.

"Let's wait and see what the allegations regarding Mr Hickey are," IOC spokesman Mark Adams told reporters. "We have full confidence in the system. Everybody is innocent until proven guilty."

Adams said the allegations concerned 1,000 tickets out of a total of 6.5 million that were made available for the Rio games.

Police have not questioned any other IOC officials, Adams said, adding that the body was ready to provide any assistance in the investigation to the authorities in Brazil.

Ticket touting is illegal in Brazil and police and prosecutors have stepped up their vigilance of the practice since the country has hosted the globe's two biggest sporting events, the 2014 World Cup and now the Olympics.

During the World Cup, police arrested high-level figures of the official Cup corporate hospitality provider for funnelling tickets to touters. At that time, authorities estimated the touting ring was making 1 million reais ($310,000) per match.

Hickey was a member of the IOC's coordination commission for the Rio Games, the body in charge of overseeing preparations for the first Olympics held in South America.

It was not immediately clear why he needed to be taken to hospital. A police spokesman was quoted by Ireland's RTE as saying it was a precautionary measure.

His arrest comes after police last week detained a director of international sports hospitality company THG Sports, Kevin Mallon, and a translator employed by the company, alleging that they could have made 10 million reais ($3 million) from buying tickets and reselling them at a higher price.

A Brazilian judge on Monday also ordered the arrest of four more THG Sports executives on accusations of fraudulent ticket sales at the Olympics. A police spokesman, however, said the four men could not be detained because they were not in Brazil.

THG has rejected the accusations against the company and Mallon, saying that more than 1,000 tickets seized by police were being held legally on behalf of authorised Irish reseller Pro 10 and criticising local Olympic organisers.

Hickey is a former judoka and is honorary life president of the Irish Judo Federation. He has been head of the OCI since 1989. In 2015, he led the first European Games organised by the EOC in Baku, Azerbaijan.