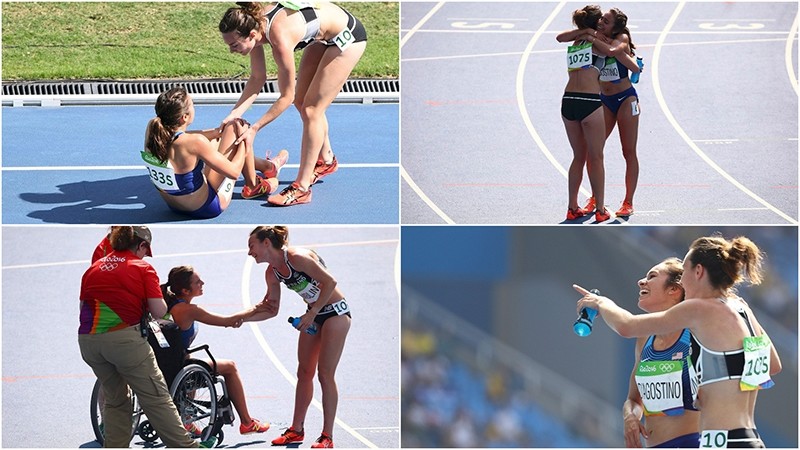 Two Olympic athletes who helped each other across the finish line after an accidental mid-race collision in the women's 5,000m have been granted places in the final, organisers confirmed.

Nikki Hamblin and Abbey D'Agostino were praised for their sporting behaviour after they clashed during Tuesday's heat.

The drama unfolded when American runner D'Agostino clipped New Zealander Hamblin with around 2,000m to go, sending both sprawling to the ground.

As Hamblin lay on the track distraught, her hopes for an Olympic medal seemingly evaporated, D'Agostino tenderly helped her to her feet instead of scrambling up to keep running, and urged the New Zealander to keep going.

"I'm so grateful for Abbey for doing that for me. That girl is the Olympic spirit right there.

D'Agostino suffered an ankle injury in the collision, but Hamblin deliberately hung back in the field to offer encouragement as the two women completed the race.

Abbey D'Agostino said Wednesday that her season was over as she tore ligaments in her knee, but her message prevailed nonetheless.

Unfortunately D'Agostino got the worst of the collision. After she finished the race, she was carted off the track in a wheelchair. Later, doctors discovered a torn ACL and strained MCL in her right knee.

No regrets, she said.

"Although my actions were instinctual at that moment, the only way I can and have rationalized it is that God prepared my heart to respond that way," said the 24-year-old from Topsfield, Massachusetts. "This whole time here, he's made clear to me that my experience in Rio was going to be about more than my race performance — and as soon as Nikki got up I knew that was it."

Hamblin has indicated she will run in the final.

"If I can even give her like one percent back of what she gave me when she helped me get up off the track that would be amazing," Hamblin said.

"I can't even put into words how amazing it is that she actually finished. When I turned around at the finish line and she's still running I was like, 'Wow'.

"I'm never going to forget that moment. When someone asks me what happened in Rio in 20 years' time, that's my story."