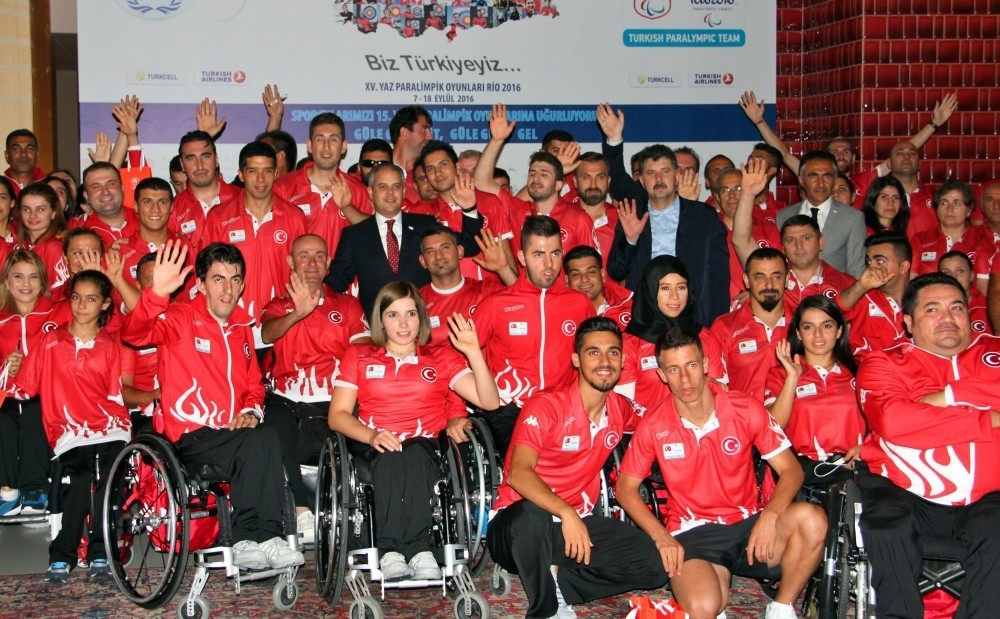 Starting next week, Turkey aims to get more than 10 medals at the 2016 Olympics and Paralympic Games in Rio de Janeiro after a disappointing showing four years ago

Turkey will compete in 2016 Summer Paralympics games with a total of 79 athletes, of which 49 are physically handicapped athletes, 29 visually handicapped athletes, and one who has mental disabilities, called a special athlete, according to AA. The games start next Wednesday and will last for 11 days. At the 2012 London Paralympic Games, Turkey won 10 medals: one gold, five silver, and four bronze. Arif Ümit Uztürk, head of the Turkish Sports Federation for the Physically Disabled, said on Thursday that they would compete with 49 athletes in eight divisions. He said they hope to better their win of seven medals from London 2012, saying: "We will do our best."

Abdullah Çetin, head of sports for the visually impaired, said that they won three medals in London and hope to at least double that this year. Birol Aydın, head of the Turkish Special Athletes Sports Federation, said Turkey's Mihriban Kaya has become one of the world's top young athletes. "There are very few spots [in the Paralympic Games] for special athletes. Mihriban got in by reaching the top internationally and also becoming the youngest athlete in the top 10," he said.

Meanwhile, Russian athletes seeking to take part individually in the Paralympic Games in order to sidestep a blanket ban will not be allowed to compete under a neutral banner, the International Paralympic Committee ruled on Thursday. A statement from the IPC said more than 175 Russian athletes who applied to compete individually would remain barred from the games, which open on Sept. 7, according to AP.

The IPC announced on Aug. 7 it was banning Russian competitors from the Paralympic Games following a World Anti-Doping Agency (WADA) report which alleged a vast state-sponsored doping program. The IPC said Thursday its position had been backed by the Court of Arbitration for Sport (CAS), which rejected a Russian request to require the body to accept applications from athletes who could show they were "clean.""The IPC has considerable sympathy for all of the Russian athletes now unable to participate in the Rio 2016 Paralympic Games," IPC chief executive Xavier Gonzalez said in a statement. "The main goal of the IPC is to enable Para athletes to achieve sporting excellence and inspire and excite the world. Tragically, however, the Russian authorities have denied their athletes this chance through their actions."

"Once the Russian Paralympic Committee demonstrates that it will be able in the future to enforce the IPC Anti-Doping Code vigorously and effectively, without interference, the IPC will be glad to welcome Russian athletes back to international competition."

The Paralympic chiefs imposed a blanket ban on Russian competitors following the release of a report commissioned by the WADA that detailed drug-cheating directed by Moscow government officials and affecting dozens of sports.

An appeal against the ban was dismissed by CAS in Switzerland on Aug. 23, drawing a furious response from Russian President Vladimir Putin, who decried the suspension as "outside the law, morality, humanity." The Paralympics ban was the latest blow to Russian sports, which has been embroiled in a tidal wave of doping allegations in recent months. The country narrowly escaped an outright International Olympic Committee ban from the just-concluded Rio Games, but still saw dozens of its athletes barred, including the entire track and field team.

Russia continues to deny the findings of the WADA report, including the involvement of the sports ministry and the Russian secret service in doping fraud at the 2014 Sochi Winter Olympics. However IPC chief Philip Craven accused Russia of a "thirst for glory at all costs," which had "severely damaged the integrity and image of all sport."

The Paralympics, held every four years for athletes with disabilities, has taken place in various forms since 1948 but has grown in importance over the past 20 years. Nearly 4,300 athletes from 164 countries took part in the 2012 London Paralympic Games.
RELATED TOPICS