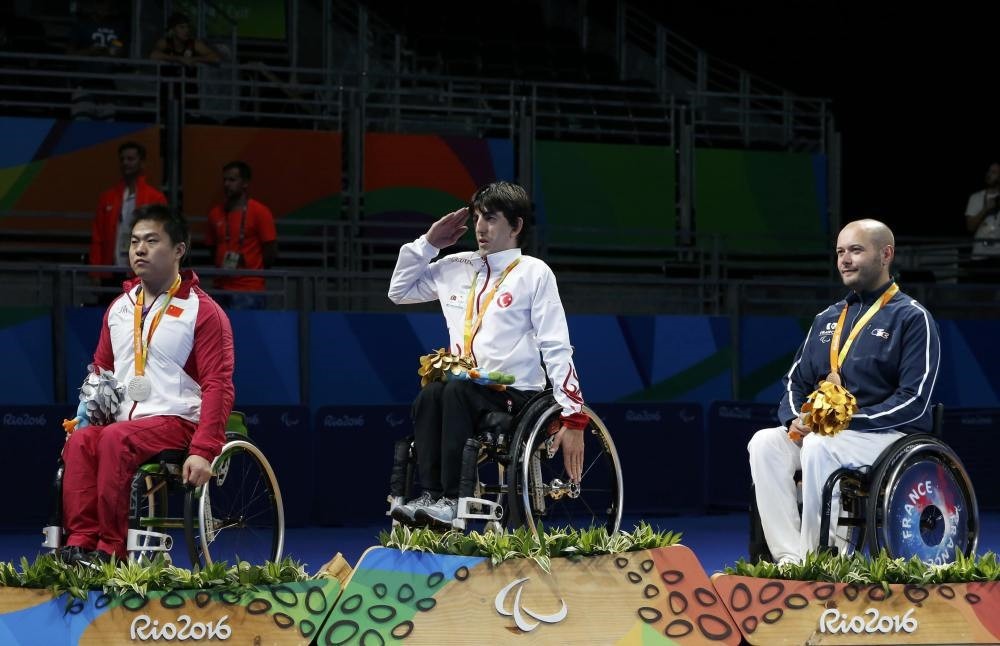 From left, Guo Xingyuan of China, Abdullah u00d6ztu00fcrk of Turkey and Maxime Thomas of France pose during the medal ceremony.
by Daily Sabah Sep 15, 2016 12:00 am
Playing in his first ever Paralympic Games, Abdullah Öztürk won a gold medal in the table tennis in Rio. Öztürk recovered from an opening game deficit to beat China's Guo Xingyuan in four games (10-12, 11-8, 11-4, 11-5) to win the Men's Singles Class 4 title.

"I have been playing for 10 years, I wanted to win so much," said Abdullah Öztürk. "After I won the semi-final, I knew that it was my big chance; you wonder if you might ever get such a chance again, for sure I was going to give it all."

The chance was taken by the 28-year-old from Ankara.

"I tried to analyze my opponent before the match so that I was prepared, I listened to my coach and we decided on the best tactics to use," added Öztürk.

"I lost the first game because I made simple mistakes; after the first game my coach calmed me down and we found solutions," explained Öztürk, who was still coming to terms with the magnitude of his achievement.

"At the moment I'm just in a daze," he concluded. "I really have not come to terms with what has happened; I'm stunned."

In the bronze medal match in the Men's Singles Class 4, Nesim Turan was not able to get a similar outcome. The 24-year-old Turk was beaten by Frenchman Maxime Thomas, the reigning European champion (11-4, 11-9, 11-4). Turkey raised their medal number to seven, with two golds, one silver and four bronze medals.
Last Update: Sep 15, 2016 12:43 pm
RELATED TOPICS